Why “Humane Economy” Is a Better Term than “Capitalism” 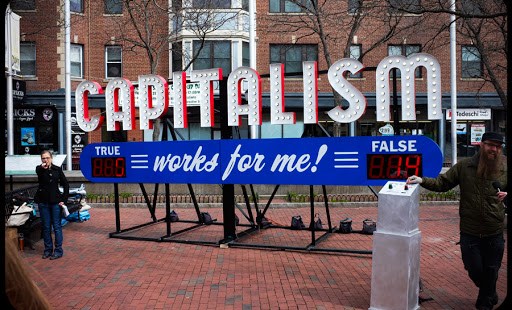 We don’t have the same system Marx critiqued in the 19th century.

A political and economic system that starts with the freedom of the human person, and allows him to meet his natural obligations willingly—only employing coercion when real injustices cannot be resolved in any other way—deserves a better name than “capitalism,” a term that Karl Marx invented to describe a system that he believed privileged property over people. We propose a term coined by the great free market economist and social philosopher Wilhelm Röpke: a humane economy.

The word “humane” conveys what we mean, both in its literal meaning and in the connotations of kindness that it carries: man’s dignity demands an economic system that provides for his needs, enables his efforts, and takes account of both his self-centered drives and his fundamentally social nature.  It is in the context of the family that man first lives in society, and the family is the crucible where basic selfishness is refined into something nobler—a concern for the welfare of other human beings, first of all those with whom one has shared upbringing and blood, and then for those people we choose to marry, and then those whom we bring into this world through procreation.

The family is the school of unselfishness, or rather of a higher selfishness that stretches and extends the circle of empathy, thinning out the membrane of the ego by expanding one’s love and work to a circle of other people.  The habit of altruism can then be applied to neighbors and fellow citizens, and finally to every member of the worldwide human family.  Our concern for others will be diminished, of course, in proportion as we move further out from the circles where we really interact with people, but the principle of solidarity teaches us that it should never fall to zero.  To treat even distant foreigners as less than fully human is to invite once again all the murderous hatreds and atrocities that marked the twentieth century.

The way for modern subhumanism and genocide was paved in the nineteenth century, when people in the very same nation, often of the same race, treated members of lower social classes as less than human.  The historical reality of capitalism was marked by profound moral blots, moments when business owners took unfair advantage of desperate workers, when laws protecting the basic human dignity of laborers were not in place, and employers used the power of the state to coerce their workers or close out free competition. American slavery, for all the feudal and paternalistic pretensions of plantation owners, was a firmly capitalist institution, providing cheap, reliable labor to large-scale farmers who engaged in the speculative enterprise of international commodity production.  Immigrants from Asia were marched at gunpoint from place to place as “coolie” gangs to do the dirtiest, most dangerous jobs that slaveowners would not risk their human “property” doing.  Irish laborers who had come to escape the Potato Famine were thrown into deadly working conditions, and child labor helped to keep down adult workers’ wages—and left the uneducated young people suited for no other kind of work outside the factories.

The necessary reforms that marked the late nineteenth and early twentieth century probably saved the market economy from the excesses of capitalism, by enacting in law restrictions and guarantees that recognized the true humanity of workers, and prevented employers from treating them interchangeably with machines.  Had such reforms not been enacted, it is likely that workers’ revolutions would indeed have swept the West, and subjected Europe and America alike to an economic system that was in the long run even less compatible with human freedom and dignity: socialism, which pretends that political systems and cultural reconditioning can remake man himself, purging him of the inborn urge to first look out for himself and the people he loves, and forcing on him altruistic self-sacrifice for the sake of fellow members of his class or of his race.  In fact, we naturally empty and even deny ourselves for the sake of our families, and are proportionately willing to make lesser sacrifices for others, our willingness generally diminishing the further people are away from what rightly remains our vital center—our selves.