Huck Finn and Pope Francis on a Raft to Freedom 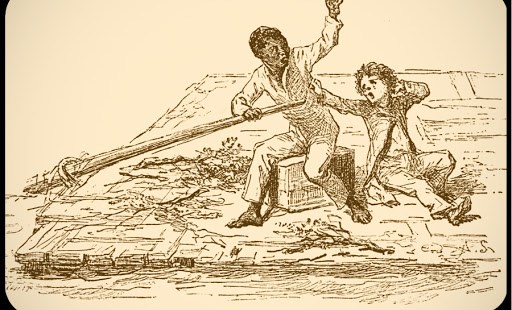 I write this from a small dressing room at Theatre Atchison, where I am lucky enough to be a part of Big River, a co-production of our local community theatre and the Benedictine College Department of Theatre and Dance, although this dressing room lends pungent irony to the show’s Roger Miller penned lyrics “You can’t imagine the menagerie air, created by a couple of guys.” I can more than imagine it…

Big River is the musical version of Mark Twain’s The Adventures of Huckleberry Finn, the story of a mistreated boy and Jim, a slave, traveling down the Mississippi to freedom.  What begins as Huck escaping his drunken sot of a father (yes, that’s my role…) becomes Huck aiding a runaway slave, against the laws of his culture and the pangs of his own conscience.  We witness Jim’s humanity slowly revealing itself to Huck, as he unlearns all that society has taught him. In a dramatic monologue in both the book and the musical, Huck steels his resolve to secure Jim’s freedom, even if it means going to hell himself: “Alright, I’ll go to hell!” It marks Huck’s (and presumably Twain’s) rejection of organized religion which had bolstered a culture where men were treated as chattel. When Silas Phelps finally sets Jim free, his “Strike the chains off that… man” betrays a hesitation and a miraculous transformation, since Jim was -seconds before- just a slave, and the N-word, a word betokening a piece of property, not “man,” was his title (which is why the word is both offensive and necessary for the story.) We more fully appreciate freedom when we see the horror from which we have been set free.

Freedom means being recognized and treated as what we truly are.

During his Angelus message on Sunday, Pope Francis spoke of another liberation: the resurrection of Lazarus. Christ’s words command our own resurrection, too.

Huck Finn sings “I have been in the darkness for so long, I am waiting for my light to shine.” For us, in a radical way, Christ is that Light. He shouts to us “Come out!” which is a cry of freedom from everything that makes us less authentically who we really are.

“‘Come out!’ It is a beautiful invitation to true freedom, to let ourselves be seized by these words of Jesus that he repeats to each one of us today. It is an invitation to remove the ‘burial shroud,’ the burial shroud of pride. Pride makes us slaves, slaves to ourselves, slaves of many idols, of many things. Our resurrection begins here: when we decide to obey this command of Jesus, going out into the light, into life; when the masks fall from our face – often we are masked by sin, the masks must fall! – and we rediscover the courage of our true face, created in the image and likeness of God.”

When Jim reveals to Huck that his father is dead, he sets Huck free. Huck is no longer under the shadow of abuse. He can “light out to the western territories” and live his life. Jim is a free man, to be treated by all as the image of God he truly is.

I have seen college students and kids from different local high schools come together as a cast, black and white, men and women, Catholics and non-Catholics. By giving the best of ourselves, we have freed each other to give the best performance we can. That is a metaphor for how the world should be.

When we treat others as who they truly are, we set them free. Jesus has done this for each one of us. He invites us, commands us, to emerge from the tomb of our selfishness and pride. And, by giving Himself for us on the cross, He gives us the strength to do what was previously impossible.

Only the cross leads to resurrection. Only sacrificial love brings true freedom. As Huck would say, “Considerable trouble and considerable joy…”