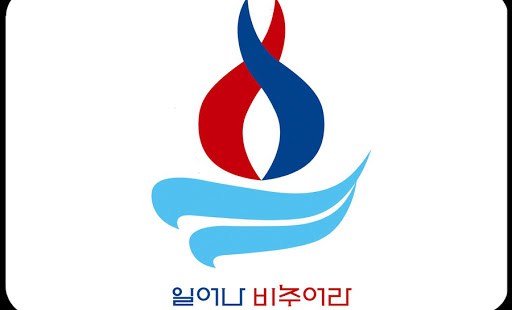 Papal Trip selects verse from Isaiah as its motto.

The Holy See has released the official motto and logo for Pope Francis’ upcoming visit to South Korea, which is the first time a Roman Pontiff has traveled to the country in since John Paul II went 25 years ago.“Arise! Shine, for your light has come, the glory of the Lord has dawned upon you” is the motto, taken from Isaiah 60:1, for Pope Francis’ upcoming Apostolic Voyage to Soth Korea, which will take place August 14 – 18, 2014.According to an April 8 article published on Vatican Radio, the motto and logo were officially presented to the Holy See by members of the Korean Bishop’s Conference, who are the organizing the trip and are present in Rome this week in order to finalize the most recent details of events to take place.The logo for the apostolic voyage display two intertwining flames, one red and the other blue, which rise from two light blue waves representing a boat.Indicating the two Korea’s, the flames wind together in order to emphasize a desire for the reunification of the two nations, Vatican Radio reports, and the blue waves that form the boat hold the shape of knife blades, which is a symbol of the sacrifice the Korean martyrs made for the Church. The waves are blue in order to represent God’s mercy, which is as great as the ocean.Among the key purposes of Pope Francis’ visit are two main events, the first being to participate in the celebration of the 6th Asian Youth Day, which is being held August 13 – 17 in the diocese of Daejeon.Expected to gather young Christians from across the continent, the encounter will be celebrated under a motto that echoes the papal trip itself: “Asian Youth! Wake up! The glory of the martyrs shines upon you.”This motto also draws attention to the second main reason for the papal voyage, which is to preside over the beatification of 124 Korean martyrs, whose causes he approved of in February. Among those slated to be canonized are Paul Yun Ji-chung, the first Korean martyr, and 123 companions who were executed between 1791 and 1888 for the Faith by the Joseon Dynasty.Pope Francis’ upcoming visit will mark the first time in 25 years that a Pope has visited the Korean peninsula, the last visit occurring when Bl. John Paul II came in Oct. of 1989, following a 1984 trip where he canonized 103 Korean martyrs, including Andrew Kim Tae-gon, the first Korean native priest.Vatican Radio also reports that Asia contains the world’s fastest growing Catholic community, which has more than doubled in the last century, despite remaining a religious minority.It is estimated that Catholicism has grown by 70% in Korea over the past decade – who now number more than five million faithful – which is about ten percent of the national population.