Why doesn't anyone care?

Certain events, small in themselves, can serve as cultural bellwethers, pointing to the direction that the culture is going as a whole. Two years ago, we saw one of these in the replacement of the Supreme Court’s last Protestant, Justice David Souter (an Episcopalian), with Justice Sonia Sotomayor (a Catholic). Since that time, the Supreme Court has been made up of six Catholics and three Jews, with no Protestants. At the time, I asked whether this signalled the twilight of Protestant America.

Support for that theory was not slow in coming. Over the course of 2012, Mitt Romney, a Mormon, won the GOP primary, beating out Newt Gingrich and Rick Santorum, both Catholics. Romney then chose Paul Ryan, a Catholic, as his vice president. He then lost to Obama, a Protestant with a Catholic vice president. Perhaps most remarkable about all of this was that it was almost unremarked-upon.

Today, I think that we’re seeing another of these bellwethers. Late-night host David Letterman recently announced his retirement: his ratings have not been faring well in the face of two new rivals, Jimmy Kimmel and now Jimmy Fallon. Today, CBSannounced his replacement: Stephen Colbert. Deacon Greg Kandra was quick to point out one reason that this was significant, with the headline: “The Catholic takeover of late night TV is complete.” Letterman was the Protestant hold-out in late night. Once Colbert replaces him, networks will be hosted by Catholics.

What we’re seeing is not necessarily a resurgence of Catholicism, at least in any meaningful sense. Not all of the people we’re talking about here are model (or even practicing) Catholics, by any stretch. Rather, we’re witnessing the collapse of Protestantism. That’s born out by the data, as this 2012 Pew report shows: 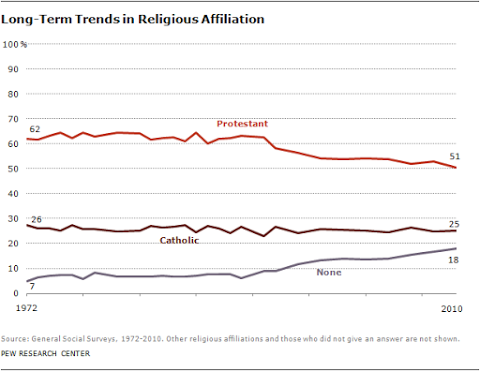 In late 2012, Pew reported for the first time that a minority of Americans polled (48%) still considered themselves Protestants.Catholicism is gaining relative to Protestantism simply because we’re treading water, while they’re drowning. This is particularly true of liberal and “mainline” Protestantism, which is simply collapsing (I’ve heard Evangelicals derisively refer to the mainliners as “sideline” Protestants, and that’s increasingly the reality).

Meanwhile, it’s irreligion, not Catholicism, that’s on the rise. As the Pew report (and subsequent NY Times coverage) point out, most of these religious unaffiliated people still believe in God. It’s not so much God that people have given up on, but religion. Part of this is a trend towards social alienation: one ironic result of technology is that we’re lonelier than we used to be, more alienated from our friends and neighbors. The natural social cohesion that holds a congregation together is increasingly lacking. But whatever the cause(s), this is a reality that I think all of us, regardless of religious affiliation, have to take seriously. As I said back in 2012:

These trends aren’t showing any signs of changing, but the future’s not set in stone. For those of us who take religion seriously, and view it as a tremendous good for souls and societies, these statistics are an important diagnostic tool. We’ve seen the bad news. How shall we respond, we who know the Good News?

Joe Heschmeyer is a seminarian, former lawyer, and blogger at Shamelss Popery.