The Christian Life is a Constant Battle Against Evil, Pope Reflects 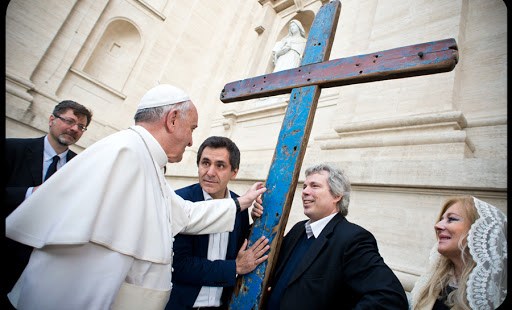 “The devil is here…even in the 21st century! And we mustn’t be naïve, right? We must learn from the Gospel how to fight against Satan.”

Pope Francis centered his daily homily on the topic of temptation, observing that it has a specific structure, and encouraging attendees to learn from scripture how to fight the devil.

Speaking to those gathered in the chapel of the Vatican’s Saint Martha guesthouse, the pontiff highlighted that every Christian struggles against the spirit of evil, just as Jesus did during his life and ministry.

Drawing attention to how Jesus himself was tempted, the Pope emphasized that as his followers, we too are the subject of spiritual attacks which seek to deter us from the Lord, because the devil “does not want our Christian witness.”

“And what does the Spirit of Evil do, through his temptations, to distance us from the path of Jesus?” he asked, observing that “the temptation of the devil has three characteristics and we need to learn about them in order not to fall into the trap.”

“Firstly, his temptation begins gradually but grows and is always growing,” the pontiff stated, adding that “Secondly, it grows and infects another person, it spreads to another and seeks to be part of the community.”

Looking to Scripture, Pope Francis recalled the temptation of Jesus in the desert, noting that the first attempt of the devil to thwart him by having him throw himself from the temple to show that he is the Messiah was almost like a seduction.

However, when Satan is rejected, he grows and returns stronger than before, continued the Pope, pointing out how even Jesus knew this when he spoke of how the devil looks for companions and then returns with all of them to torment the same person.

Recalling Jesus’ preaching in the synagogue, the Roman Pontiff noted that his enemies’ words – “but isn’t this the son of Joseph, the carpenter, the son of Mary. He never studied so with what authority can he speak?” – illustrate how temptation begins as what seems like a small trickle of water, but eventually turns into a flood.

“We have a temptation that grows: it grows and infects others,” he repeated. “For example, let’s look at gossip: I’m a bit envious of this or that person and at first I’m just envious inside” but eventually “I need to share it and go to another person and say: ‘But have you seen that person?’”

Inevitably, “this gossip tries to grow and infects another and another,” he went on to say, adding, “This is the way gossip works and all of us have been tempted to gossip!”

“Maybe not one of you, if you’re a saint, but I too have been tempted to gossip! It’s a daily temptation. And it begins in this way, discreetly, like a trickle of water. It grows by infecting others and in the end it justifies itself.”

Concluding his reflections, the Pope encouraged attendees to be vigilant in their prayer, noting, “We are all tempted because the law of our spiritual life, our Christian life is a struggle: a struggle.”

“That’s because the Prince of this world, Satan, doesn’t want our holiness, he doesn’t want us to follow Christ,” he repeated.

Observing how some might say, “But Father, how old fashioned you are to speak about the devil in the 21st century,” the Pope warned them to “look out because the devil is present!”

“The devil is here…even in the 21st century! And we mustn’t be naïve, right? We must learn from the Gospel how to fight against Satan.”