Bl. John Paul Is the Reason I’m a Priest 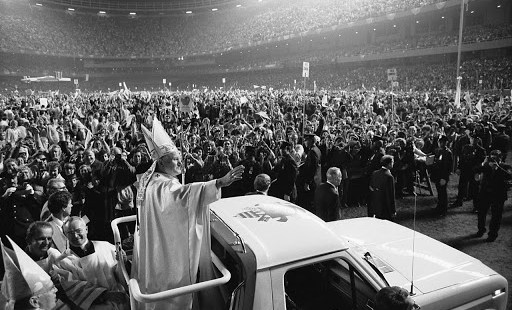 Pope John Paul is the reason I am a Catholic priest. I had thought about becoming a priest during my college years, but when friends and I attended the 1993 World Youth Day in Denver, Colo., it was a game changer. The soon-to-be St. John Paul’s witness, conviction, and call for radical conversion in Christ made me want to run for the Gospel.

“Let’s go on a road trip and see Pope John Paul,” were the words of a friend as we sat in the AC of an off-campus house at Benedictine College. One buddy called his dad to ask to use the car. We hadn’t officially registered for WYD events, so someone else called a Denver friend whose father was a deacon to ask/beg if we could crash on their living room floor. Someone else wrote “Honk if you love the Pope” on the back windshield and we began the nine hour drive to Pope John Paul in Denver.

The drive itself was an adventure. Vans full of teens driven by religious sisters honked because they loved the pope. At one wayside rest, a family honked. When they stopped, they said, “we’re Methodists, and we’re going to Denver because we love JPII.”

Because we didn’t have tickets to the stadium, our group encountered Pope John Paul from the Mall in front of the Denver capital.

The media was suspicious and sometimes mean. They predicted crime would increase; it went down. They said not many would show up. Over 500,000 came. The JPII generation defied all the odds they set.

As we gathered in front of a Jumbotron at the Denver capital to watch JPII arrive at the stadium, we got a surprise visit. The helicopter he was in circled the thousands we were with, dipped its propeller and then continued on. When the world and even some so-called Catholic leaders forgot and ridiculed young, faithful Catholics, Pope John Paul remembered us — even from his helicopter. It was my first encounter with this man. I know I wasn’t the only one with tears in my eyes and joy in my heart. He was great.

World Youth Day introduced me to the universal community that Jesus established, his family, the Church. It was not just one parish or for just one nation. I felt what I knew, that the Church Jesus Christ established was for all nations. This changed me. My heart was and is on fire to be part of this reality.

John Paul was personal too. My grandmother, Benedictine College Class of 1929, called from the bank she worked at in Kansas City to say a Jewish woman, the mother of the owner, had just asked her to wire $10 to Pope John Paul with the message, “Don’t spend it in one place.” The woman told my grandmother she was a childhood friend of the Pope in Poland. With John Paul, Catholics and non-Catholics were neighborhood friends. Pope John Paul made a universal community a personal neighborhood.

Pope John Paul impacted the college in many ways. For me, it was when we implemented his Theology of the Body in the dorms that his impact was and is most felt on campus. .  Some students were fighting for co-ed dorms.  Pope John Paul’s Theology of the Body helped everyone understand God’s plan for men and women.  That men needed men’s dorms to be men, to learn to shamar, to build manly friendships, to find brothers in Christ.  That women needed women’s dorms to be women, to learn unity, to build womanly friendships and sisterhood in Christ.  There is a feminine genius and masculine adventure and Pope John Paul helped students begin to recognize the gift of their sexuality.  Dorm life rooted in a Christian anthropology is something young people are thirsty for.  Pope John Paul’s Theology of the Body answered their deepest questions about friendship, sexuality, and the importance of a brotherhood, sisterhood and community that was Christ centered.