The Youth that Died in Rome

But that's not the whole story.

100 young people travelled from all over the world to Rome. And here on Friday every single one of them died.

But that’s not the end of the story.

They came and took part in the Emmanuel School of Mission (ESM), a formation programme run by the Emmanuel Community (founded in France by Pierre Goursat), where they are formed in their faith as men and women in Christ, learning how to be true missionaries, to take back and live in their own states of life.

This Easter the ESM came and ran a Triduum retreat at the
Centro San Lorenzo (CSL), the Vatican’s international Youth centre founded 31 years ago by Blessed John Paul II. Over a hundred youth participated and for every single one of them their lives were changed forever.

It began on the Holy Thursday, in the Upper Room. They celebrated Christ’s institution of the Eucharist. 12 young men sat at the foot of the altar while their chaplain Fr Arthur from France, dropped to his knees and washed each of their feet, just as Jesus did for his disciples more than 2000 years ago.

Then through the night these young men and women watched Christ in the garden of Gethsemane, trying not to fall asleep like the disciples did, but accompanying their Lord in His suffering.

On Friday the morning was spent in prayer, with talks on Confession and then came the moment, the great Sacrificial act that made the earth tremble, the temple crack and the heavens open in thunder and lightening:
Christ was crucified. 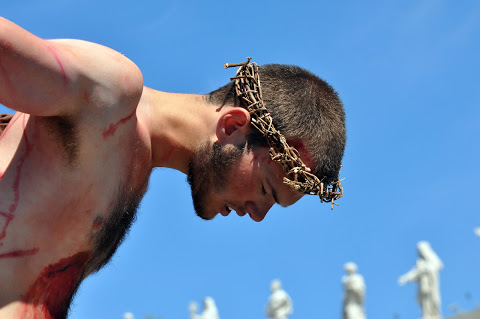 The young people reenacted the Way of the Cross on the square of St Peter’s Basilica, and in that terrible and sanctifying moment – as Christ let out that heart piercing cry, His last breath spent –  each one of these young people, hearts filled with sorrow and guilt and love, embraced the Cross of Jesus and insodoing, died to their old life.
Silence held.

No movement, no words, no song.

They proceeded into the old stone church of San Lorenzo church, and entered into the liturgy of the adoration of the Cross, as Pope Francis did just a few feet away in St Peter’s Basilica.
“Coming into the Church on Friday” recalled 23 yr old Cecile, “it was completely empty and dark; Jesus wasn’t in the Tabernacle, there was red fabric covering the cross and the statue of Mary, everything was bare; then we began to pray together… it was so powerful, and really helped me enter into the mystery of the passion, to really comprehend what had just happened.” 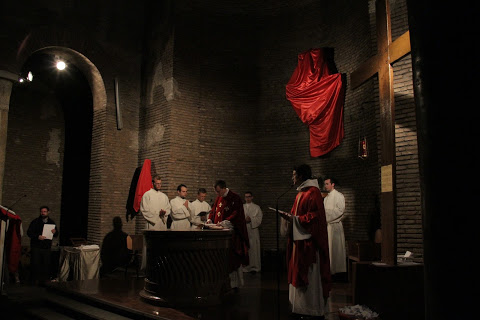 Then Father Charles, director of the ESM,  guided them in this most mournful prayer.

“The letter to the Hebrews tells us that on the Cross Jesus prayed with supplication and tears” he said.  “Jesus was not only praying with words, but with suffering, mourning and weeping. It means that we too are called to pray not only with words but with all of our hearts.”

The youth, exhausted with living the passion, went to sleep in silence and reflection, and on Holy Saturday spent the day in waiting and hoping alongside Mother Mary, the ultimate example of faith, love and perseverance in the Lord.

Then the vigil came.

It was stuff of dreams. But it was real.

All was darkness. The fire was lit outside the church. 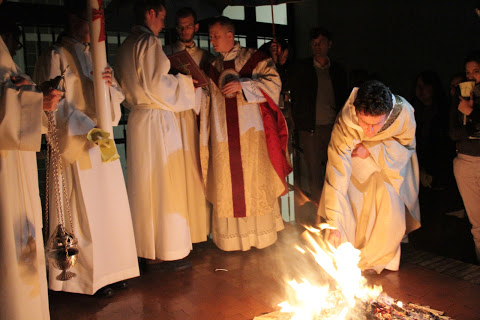 The flame was passed first from the priest, then on to every hand, and the Church was filled with flickering vigil candles, each one a hope, an anticipation of the outburst of light and life that was soon to take place in the mass.

The liturgy took us through the whole of our history from the beginning of the Old Testament up to the moment we’d all been waiting for.
Tags:
Easter