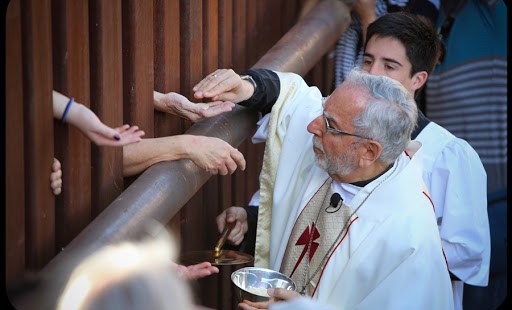 Besides, far from being drains on their new societies, immigrants are a vital force of cultural and economic strength.

Last summer, Pope Francis paid a pastoral visit to the people of Lampedusa. At the boundaries of Europe, he shined a bright light on the immigrant experience and the need to overcome the culture of indifference. That visit inspired US bishops to relive the pope’s gesture stateside.

Under the direction of Cardinal Séan O’Malley, a member of Pope Francis’ Council of Cardinal Advisers, eight bishops, representing the US Conference of Catholic Bishops, paid a pastoral visit to Nogales, Arizona on April 1. There, the church leaders sought to relive the immigrant experience, crossing the treacherous Mexico-US border after sojourning for hours in the hot desert and eating at a Mexican cantina with would-be immigrants.

In Nogales, the bishops celebrated the Eucharist against the backdrop of the rusted border wall that divides the US from Mexico. America’s bishops had sent the eight member delegation to remember those who had died in the hot and desolate desert, searching for a fresh start to life and better financial opportunities for their families in the United States.

At Mass, the bishops and others gathered for the event, listened to the words of Jesus’ parable about the good Samaritan. Speaking at turns in English and Spanish, Cardinal O’Malley spoke about the meaning of the parable in the context of the United States. He explained that

“We come to the desert today because it is the road to Jericho; it is travelled by many trying to reach the metropolis of Jerusalem. We come here today to be a neighbor and to find a neighbor in each of the suffering people who risk their lives and at times lose their lives in the desert.

“Pope Francis encourages us to go to the periphery to seek our neighbor in places of pain and darkness. We are here to discover our own identity as God’s children so that we can discover who our neighbor is, who is our brother and sister.

“As a nation of immigrants we should feel a sense of identification with other immigrant groups seeking to enter our country.

“The United States is a nation of immigrants. Only the indigenous Native Americans are not from somewhere else. So the word of God reminds us today that our God wants justice for the orphan and the widow and our God loves the foreigners, the aliens and reminds us that we were aliens in Egypt.”

In a pointed passage of his prepared remarks, Cardinal O’Malley issued a direct challenge to both voters and law-makers alike, insisting that “The author of Hebrews urges us to practice hospitality, for through it some have unknowingly entertained angels.” And, he added that “The [immigration] system is broken and is causing untold suffering and an untenable waste of resources, human and material.” As such, it must be fixed.

To be sure, these demands for immigration reform tend to invite criticism. Oftentimes Pope Francis and the US bishops are presented as agents of leftist political factions. On March 31, the Pope told journalists that “I heard two months ago that someone said … ‘This Pope is a communist.’” He shot back: “No! This [i.e., care for the poor and the marginalized] is a banner of the Gospel, not of Communism: of the Gospel!”

Nonetheless, Pope Francis’s and, the bishops’ humble faithfulness to the Gospel of Jesus Christ transcends ideological boundaries and categories. And as such, it is capable of resonating with people on all sides of the political spectrum. As a matter of fact, both the pope and the bishops seem to have struck a chord in conservative American politics.

On April 6, during a public appearance at the George H. W. Bush Presidential Library and Museum, Florida’s 43