Did Pope Francis Tell a Woman Married to a Divorced Man She Can Receive Communion? 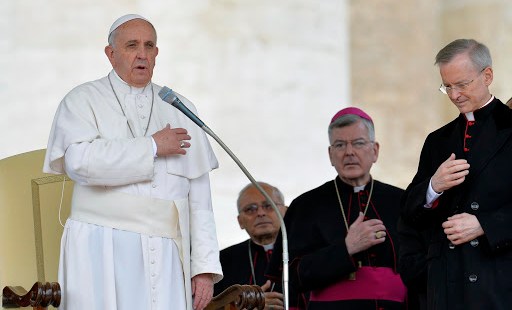 A Vatican spokesperson confirmed the phone call but wouldn’t comment on the contents of their conversation.

An Argentine woman who is married to a man who was previously married and divorced says she spoke to Pope Francis on the phone recently and he told her she can receive communion.

Jacqueline Sabetta Lisbona wrote a letter to Pope Francis in September asking for clarification on whether or not she could receive communion given her marriage situation, her husband Julio Sabetta told CNN.

The Telegraph reports that Pope Francis told her, "A divorcee who takes communion is not doing anything wrong.” In response to her explaining that her local priest said she was living in sin and therefore couldn’t receive communion, she says the pontiff replied, “There are some priests who are more papist than the Pope.”

A Vatican spokesperson confirmed that Pope Francis spoke with her on the phone but would not comment on what they talked about.

"It’s between the Pope and the woman," Fr. Thomas Rosica, a consultant for the Vatican press office, told CNN. "The magisterium of the church is not defined by personal phone calls."

CNN Belief Blog Editor Daniel Burke sees this story in a longer line of events in which "Pope Francis has signaled that some sort of change could be on the horizon." Catholic apologist Jimmy Akin is more agnostic on the meaning of this particular story, "Unless further information is forthcoming from a reliable source, the incident must remain uncertain on every front." He also argues there are good reasons to think no substantial change will be coming.

Pope Francis is planning a Synod of Bishops for this coming October to discuss matters related to marriage, including the status of divorced and remarried Catholics.

Last October, prefect of the Congregation for the Doctrine of Faith Archbishop Müller published an article defending the Church’s current discipline of not admitting divorced and remarried Catholic to communion, saying "there is no possibility of admitting remarried divorcees to the sacraments, in view of their intrinsic nature."