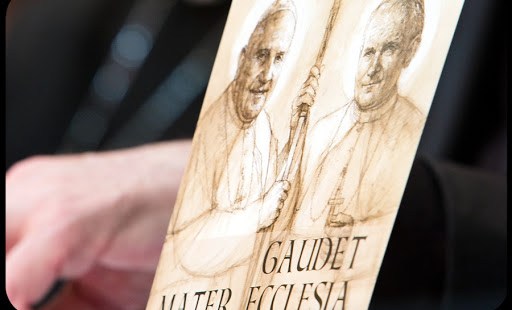 This Sunday, Angelo Giuseppe Roncalli (Pope John XXIII) and Karol Jozef Wojtyla (Pope John Paul II) will be recognized as saints of the Catholic Church, and may God be praised for it!  No one with the slightest amount of historical sensibility would doubt that these men were figures of enormous significance and truly global impact.  But being a world historical personage is not the same as being a saint; otherwise neither Therese of Lisieux, nor John Vianney, nor Benedict Joseph Labre would be saints.  So what is it that made these two men worthy particularly of canonization, of being “raised to the altars” throughout the Catholic world?

Happily, the Church provides rather clear and objective criteria for answering this question.  A saint is someone who lived a life of “heroic virtue” on earth and who is now living the fullness of God’s life in heaven.  In order to determine the second state of affairs, the Church rigorously tests claims that a miracle was worked through the revered person’s intercession.  It would be the stuff of another article to examine these processes in regard to the two Popes under consideration:  both are, in fact, fascinating.  But for now I want to focus on the extraordinary virtues that these two men possessed, moral and spiritual qualities so striking that they are proposed to all for emulation.

When the Church speaks of the virtues, it is referring to the cardinal virtues of justice, prudence, temperance, and courage, as well as the theological virtues of faith, hope, and love.  It wouldn’t be possible, within the brief scope of this article, to examine our two new saints in regard to all seven of the virtues, but let us make at least a beginning. Justice is rendering to someone what is due to him, or in more common parlance, doing the right thing.  When he was nuncio to Turkey and stationed in Istanbul in the early years of the Second World War, Archbishop Angelo Roncalli saved the lives of many Jews who were threatened by the Nazi terror.  Taking advantage of Turkey’s neutral status and the Vatican’s diplomatic connections, Roncalli arranged for transit visas and in some cases forged baptismal certificates in order to facilitate the transit of Jews from Eastern Europe to Palestine.  In the process, he rescued around 24,000 people who otherwise would certainly have found their way to the death camps.  That this act of extraordinary justice also called, furthermore, for considerable courage goes without saying.

Roncalli became nuncio to France at an extremely delicate and dangerous period of French history.  Charles de Gaulle and his Free French forces had just liberated their country from the Nazis and had begun to settle scores with the collaborationist Petain government and its sympathizers, some of whom were churchmen in high positions.  At the time of Roncalli’s arrival in Paris, de Gaulle and Pope Pius XII were in sharp disagreement as how best to resolve the situation, since the General and the Pope were not entirely on the same page regarding the relative guilt and innocence of certain bishops.   All of this is to suggest that the new papal nuncio was stepping into a situation sticky and complicated in the extreme.  By all accounts, Roncalli handled it with remarkable grace and deftness of touch.  Keeping all parties more or less satisfied, and resolving the difficulties with a minimum of pain, he honored the demands of both the French state and the Church.  In performing this impressive high-wire act, Roncalli was demonstrating, with extraordinary clarity, the virtue of prudence, which is knowing how best to apply moral norms in concrete situations.  Prudence is a feel for the right thing to do in the present circumstance, and nuncio Roncalli clearly had it.