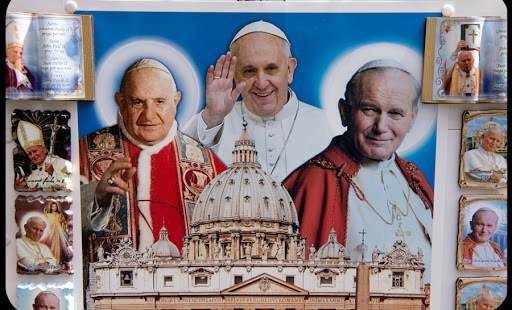 I wouldn’t be a Catholic priest without their generosity.

On December 2, 1960 the Swiss guards at the Vatican were surprised to see an Anglican Archbishop striding up the stairs in a purple cassock and Canterbury cap. The energetic Archbishop of Canterbury, Geoffrey Fisher had come to see Pope John.

It was the first time an Archbishop of Canterbury had paid a visit to the Vatican for six hundred years. Fisher had been on a trip to the Holy Lands, and on the way back to England had stopped in Istanbul to see the Ecumenical Patriarch. In June of 1960 Pope John XXIII had established a new Secretariat to promote Christian unity. Sensing a new spirit of ecumenism in the air, Archbishop Fisher was also determined to visit the Pope.

The Archbishop’s proposed visit did not please the staid gatekeepers of the papacy. Secretary of State Cardinal Tardini tried to downplay the visit, and even at the last moment the Anglican delegation were unsure whether they would be welcomed or not. As it turned out, Pope John gave Archbishop Fisher a warm embrace and so took a small, but significant step toward church unity.

The pull quote from the visit was Pope John asking Archbishop Fisher when the Anglicans would return. Fisher replied, “It is not a question of returning, but going forward together.” The Pope insisted that the Archbishop meet with Cardinal Bea, the head of the new secretariat for church unity, and that meeting led eventually to the establishment of the ARCIC talks (ARCIC standing for Anglican Roman Catholic International Commission). The ARCIC talks have continued off and on for fifty years and have produced some substantial agreement in certain areas between Catholic and Anglican theologians.

Twenty years later another giant of a pope, John Paul II took another small, but significant step towards Christian unity. In 1978 a group of Episcopal priests in the United States petitioned Pope Paul VI for permission to be ordained as Catholic priests even though they were married. They knew this was a possibility because it had happened during the pontificate of Pius XII when a group of European Lutheran pastors had converted to the Catholic faith. They were granted dispensations from the vow of celibacy allowing their ordination as Catholic priests. The possibility was also mentioned in Paul VI’s encyclical Sacerdotalis Caelibatus.

At the death of Paul VI in August 1978, and following the month long pontificate of John Paul I, the pope from Poland took over. By 1980 the request of the Episcopal priests finally made it to the desk of the Holy Father. John Paul’s response was, “Be generous to these men.” Knowing the great sacrifices Anglican priests would make to enter full communion with the Catholic Church, Pope John Paul II asked for the Pastoral Provision to be established.

The Pastoral Provision is a special procedure for married former Episcopal priests to receive a dispensation from the vow of celibacy to be ordained as Catholic priests. Provision was also made for their congregations to be received into full communion and to retain a certain measure of independence and to worship with an approved Anglican style liturgy.

By the early 1990s this permission was extended to England and other parts of the English speaking world, and in 2009 Pope Benedict established the personal ordinariates for Anglicans. These are ecclesial structures which grant a broader permanent base for an Anglican style “church within a church”. Similar to Eastern rite churches, the churches of the ordinariate have their own liturgy and will often have married priests. Pope Francis expanded their vocation further by allowing members of the ordinariate to welcome other Christians through evangelization and outreach.