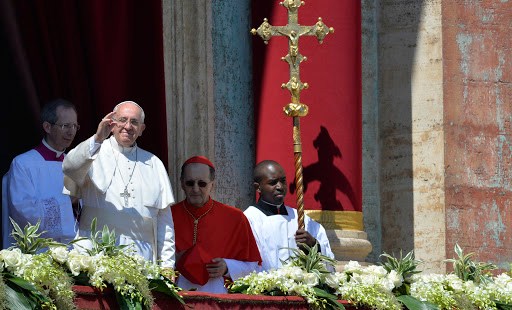 “Christian matrimony is a lifelong covenant of love between one man and one woman,” he also said.

Pope Francis on April 25 stressed the need for bishops and priests to give a “consistent witness” to Christian moral teaching, including the lifelong nature of Christian marriage, and to teach these truths “with great compassion.”

“The holiness and indissolubility of Christian matrimony, often disintegrating under tremendous pressure from the secular world, must be deepened by clear doctrine and supported by the witness of committed married couples,” Pope Francis said.

“Christian matrimony is a lifelong covenant of love between one man and one woman; it entails real sacrifices in order to turn away from illusory notions of sexual freedom and in order to foster conjugal fidelity.”

The Pope’s remarks came in a meeting with bishops from South Africa, Zimbabwe and Swaziland, who were making their routine ad limina visit to the Holy Father, Vatican Radio reports.

Pope Francis noted the pastoral challenges presented by marital separation and divorce, even in Christian families, and the lack of a stable home for many children.

“We also observe with great concern, and can only deplore, an increase in violence against women and children,” he continued. “All these realities threaten the sanctity of marriage, the stability of life in the home and consequently the life of society as a whole.”

He stressed the need to continue “indispensable” marriage preparation programs that give “new hope” to young people for their futures as husbands, wives, fathers and mothers.

Pope Francis’ comments follow media reports about the contents of a recent phone call he allegedly made to a remarried divorced woman in Argentina. The woman claimed that the Pope told her she could receive Holy Communion.

Catholic teaching recognizes the nature of matrimony as indissoluble, so a new marriage can only be contracted if the first union was found to be invalid. Those who have entered a new union without a recognition of annulment may not be admitted to Communion.

On April 24, Vatican spokesman Father Federico Lombardi said that the media coverage of the woman cannot be confirmed as reliable and is “a source of misunderstanding and confusion.”

In his comments to the southern African bishops, Pope Francis also noted the damage caused by abortion and an attitude of disrespect for life.

“Abortion compounds the grief of many women who now carry with them deep physical and spiritual wounds after succumbing to the pressures of a secular culture which devalues God’s gift of sexuality and the right to life of the unborn,” he said.

In addition, the Holy Father acknowledged the bishops’ reports that some Catholics are turning away from the Church to other groups, as well as a decline in family size that is affecting the number of vocations to the priesthood and religious life.

“In this sea of difficulties, we bishops and priests must give a consistent witness to the moral teaching of the Gospel,” he said. “I am confident that you will not weaken in your resolve to teach the truth ‘in season and out of season’ (2 Tim 4), sustained by prayer and discernment, and always with great compassion.”

The Pope also recognized several other concerns of the southern Africa bishops, including the plight of refugees and migrants, dishonesty and corruption in society, and unemployment.

“Most of your people can identify at once with Jesus who was poor and marginalized, who had no place to lay his head,” he observed. “In addressing these pastoral needs, I ask you to offer, in addition to the material support which you provide, the greater support of spiritual assistance and sound moral guidance, remembering that the absence of Christ is the greatest poverty of all.”

Despite the challenges facing the bishops, the Pope praised their “flourishing parishes” and their efforts to train permanent deacons and lay catechists. He praised African clergy and vowed religious who served “God’s most vulnerable sons and daughters,” including widows, single mothers, the divorced, children at risk, and the region’s several million AIDS orphans.

“Truly the richness and joy of the Gospel is being lived and shared by Catholics with others around them,” the Pope said. “I pray that they will continue to persevere in building up the Lord’s Kingdom with their lives that testify to the truth, and with the work of their hands that ease the sufferings of so many.”

He encouraged the bishops to “rekindle the precious gift of faith so as to renew your dedicated service to God’s people!”

“May the saints of Africa sustain you by their intercession. May Our Lady of Africa be always at your side, and may she guide you as you share in the teaching, sanctifying and governing mission of Christ,” he concluded.