The Canonization Has Finally Arrived! 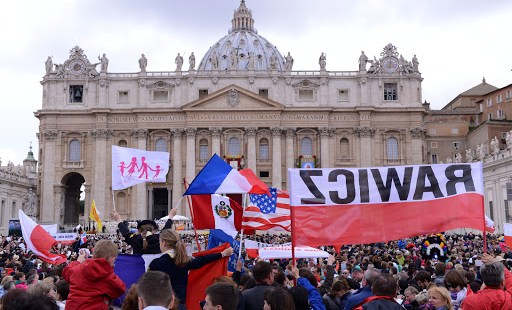 The much awaited moment has finally arrived. The Canonization is now. Two Popes –of our time– are declared saints in heaven.

St Peter’s Square, Via della Conciliazione and all the surrounding streets are packed tightly with millions of pilgrims who have been camped out since the night before. All a little tired, all a little damp, but every face in this sea of faithful is lit up with joy.

All eagerly await the moment that the friend and beloved teacher who they knew, who they touched, who they followed, would be proclaimed a Saint.

Present at the ceremony are representatives from all over the world, as well as Pope Emeritus Benedict XVI, who seems joyful and serene as he con-celebrates this historical mass with his Successor Pope Francis.

Four popes together in one celebration!

The grand moment came at 10.35, as the voice of the Holy Father Francis echoed through the crowds out of immense microphones stationed around the whole of central Rome.

John Paul II and John XXIII, the two popes of the 20th Century, the “bookends” of the Vatican Council II, are declared saints, interceding for us all in heaven.

Pope Francis in his homily emphasised the fact that this historical event has occurred on Divine Mercy Sunday, to which John Paul II was so devoted. Today we see “the glorious wounds of the resurrected Jesus” he said.

“The wounds of Jesus are a scandal for faith, but they are also the verification of faith” he continued. “For this reason, in the body of the risen Christ, the wounds don’t disappear; they remain, for they are the permanent sign of the love of God for us, and they are indispensable for believing in Christ, not to believe that God exists as such, but to believe that God is love, mercy, and faithfulness.”

Francis echoed St Peter when he wrote to the Christians, taking the words of Isaiah: “By his wounds you have been healed.”

He went on to say that the two saint popes, St John XXIII and St John Paul II had the “courage to look at the wounds of Jesus, to touch his wounded hands and his pierced side. They weren’t embarrassed by the flesh of Christ, they weren’t scandalized by Him and His Cross, and neither were they embarrassed by the flesh of their brothers, because in every suffering person they saw Jesus.”

He continued: “They were two courageous men, filled with the Holy Spirit, giving witness to the Church and world of the goodness of God and His mercy.”

Francis affirmed that in these two “contemplative men of the wounds of Christ and witnesses of His mercy” they demonstrated “a living hope together with an indescribable and glorious joy.”

This was a joy and hope that the “resurrected Jesus gave to his disciples and from which nothing and no-one can deprive them of” he exclaimed. He explained that these two saints also received this gift from the Lord, and “in turn, gave it in abundance to the people of God, receiving them eternal recognition.”

This gift of hope and joy was also “breathed into the first communities of faithful in Jerusalem” said Francis. “It is a community in which they live the essentials of the Gospel, which is to say, love and mercy in simplicity and fraternity.”

He continued: “And this is the image of the Church that the Second Vatican Council kept before them. John XXIII and John Paul II collaborated with the Holy Spirit to refresh and update the Church according to its primordial physiognomy, a physiognomy that the saints have given to it over the course of the centuries.”

“Lets not forget that it’s the saints who enable the Church to grow and move forward” he added. “In the convocation of the Council, John XXIII demonstrated a delicate docility to the Holy Spirit.”

Francis called him a “guided, guider” for he “let himself be guided by the Holy Spirit.” And this, said the Pope, “was his great service to the church.”

The Holy Father took the opportunity here to emphasise the current Synodal journey of the family taking place in collaboration with the families. It is “a journey in which he [John Paul II] is surely accompanying and sustaining them” he asserted.