Here’s the inside "scoop" on his love of ice cream and the quaint little shop where he bought it.

We made our way down a cobbled side street in central Rome. Arriving at our a quaint old building, we met with Nazzareno Giolitti, who was about to reveal Saint John Paul II’s favorite guilty pleasure.

The spirited fellow welcomed us “Italian style” with a hearty handshake, a kiss on each cheek and a twinkle in his eye.

“It began like this,” he recounted, “A man who is now no longer with us, who kept a bar near the Vatican pharmacy, one day came face to face with Pope Wojtyla, who had gone out to take a coffee.” Indeed it is legend here in Rome that John Paul II often took little trips out of the Vatican incognito: a little walk here, a coffee there.

“His Holiness started talking to this person, and said to him that he had a particular love of ice-cream, and so that man recommended him to taste it at the house of Giolitti.”

“Shortly afterwards,” continued Giolitti, “a monsignor arrived from the Vatican and asked me to provide a sample of our different flavours of ice-cream, but without telling us who it was for. It was only afterwards, when they came to collect it that he told me that it was for Pope John Paul II!” he exclaimed, letting out a burst of joyful laughter.

“And Pope Wojtyla had a particular liking for our marron glacé ice-cream, so much so that this monsignor started to come on a regular basis to collect his order for his Holiness; a habit that continued for a good long while.”

Then he recalled that after some time, “The sisters who cooked lunch for the Holy Father weren’t too happy that he was going elsewhere, so they suspended this habit of sending out for his favourite ice-cream.”

Luckily for the family Giolitti, however, the Saint still sent for his marron glacé whenever he was out at Castel Gandolfo– the Pontiff’s summer residence, outside of Rome. “When he was at Castel Gandolfo, I sent out a pack of marron glacé ice-cream once every couple of days or so for the Holy Father,” he said. “I didn’t want to be paid, but he insisted that I absolutely must be paid, so I thought ‘at least I’ll put the Giolitti stamp on the confectionary.’”

“He was extremely pleased with our marron glacé!” Nazzareno recalled proudly.

Giolitti then told us about another encounter he had with the Saint. “When he came here to our parish of Santa Maria in Aquiro, I prepared a special cake for Pope Wojtyla and the parish priest Fr Giovanni said to me: ’Nazzareno, but the Pope when he found out it was you who made the cake, asked why you hadn’t sent your delicious ice-cream’,” he remembered, chuckling, “and I replied “Oh! I sent you what you asked me!”

“But I provided this ice-cream to the Holy Father with much satisfaction” he continued more seriously, “because he was an exceptional person; it has been a pleasure to follow the Pope since I was a little child.”

Giolitti said how the Saint had always been an important figure in his life, “he had a freedom of spirit that I greatly admired…so to find out that it was him who loved our ice-cream, filled me with pride.”

“It was something stupendous and beautiful for me!” he added.

The Giolitti family’s link to the Roman Papacy did not begin with Pope John Paul II however. “Our family is from Piedmont,” he explained,  “and in 1849 when the french army allowed the return of Pope Pius to Rome, my family followed the army down with their cows to do the catering.

“So the Pope arrived back to Rome, and my great grandfather, Giuseppe, along with him.” Then in 1870 the family opened their first dairy, which became the official supplier for the Roman princes.

““We now are the fourth generation, and the fifth generation is already ready to go!” he told. “We are at a unique time right now, because there are three generations working together here in the Giolitti family gelateria.”

The grandmother was working away behind one of the counters as we spoke, who welcomed us with as big a smile as her son and grandson.

“The great Giolitti generation was the one before mine, my father and also that of my great-grandfather” Nazzareno explained, “but with my generation we have been lucky enough to bring Giolitti to the world. We are now present in Istanbul, Dubai, and Kuwait City.”

The Giolitti name has indeed become somewhat iconic of true italian ice-cream, “but this is because it has remained a genuine, healthy and fresh product” emphasised the Roman family-man, “ours is true homemade ice-cream!”

He told us with all enthusiasm that real ice-cream is something beautiful. “It’s a celebration! a celebration of colours; when even the oldest of people turn up here, they become children before it. These are ancient flavours, made only out of fresh ingredients, it isn’t something comercial.”

“It’s a real celebration!” he added.

This was something that Saint John Paul II obviously appreciated and took advantage of in his life here in Rome.

Before we knew it, two big glass dishes filled with various flavours of fabulous looking ice-cream arrived before our eyes, topped with freshly made biscuit wafers.

And I must say, John Paul II was right on the mark.

Next time you’re in Italy, definitely make a stop at the Gelateria Giolitti! 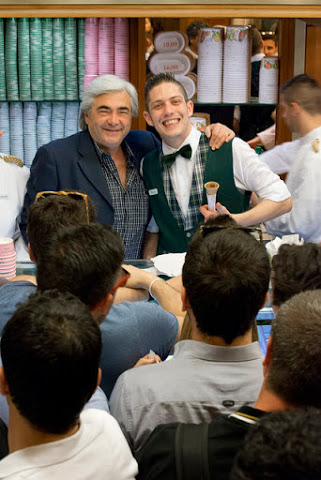