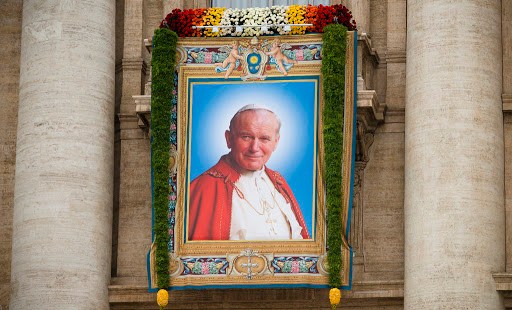 Andreas Widmer reflects on the kindness of John Paul II.

The life of St. John Paul II was characterized by an intense love for both God and the human person, reflected a former member of the Swiss Guard who helped to protect the pontiff.

“The best way to say it is that he was the most fully human person I’ve ever met,” Andreas Widmer told CNA, adding that despite being the Pope, John Paul II was “a normal guy.”

“You would have a blast with him,” said Widmer of the former Pope, and this normalcy reflects John Paul II’s emphasis that all people are called to holiness.

“He would always say that we all know saints,” Widmer recounted during the April 16 interview. “God made us to be saints and wants us to be saints, so we should really give that a try.”

“In my book, John Paul has already been a saint for a long time,” he said, adding that he was “joyous” at the news of the pope’s official canonization, which he believes “really cements and solidifies his ministry.”

Widmer was a member of the Pontifical Swiss Guard from 1986-1988. He now serves as director of Entrepreneurship Programs at The Catholic University of America’s School of Business and Economics.

When he started out as a “foot soldier,” in the Swiss Guard, Widmer said that he didn’t have any particular interest in his boss besides the fact that he was the “guy we’re protecting.”

“I wasn’t in any religious awe of him,” he explained. “I approached him as I approached anybody else. I didn’t have any pre-judgments for him or against him.”

Over time, however, Widmer grew in his faith and came to better understanding of the Pope’s ministry, seeing firsthand the mark that John Paul II was leaving on the world.

Though he never traveled with the Pope himself, Widmer saw the effects of Pope John Paul II’s extensive travels to 129 countries during this long pontificate – a trademark of his papacy that harkened back to the early popes’ travels “in the then-known world.”

Those travels were an example of “evangelizing in the true sense of the word: we’re bringing Christ to the world,” Widmer said. They were also a pragmatic decision: “it’s easier to bring him there” than to bring millions of pilgrims to the Vatican, he suggested.

Through his travels, the Pope “made himself accessible” and “redefined the papacy” in terms of accessibility, Widmer continued. A century ago, he explained, most people around the world would not have been able to recognize the Pope in photographs. “Now you can,” he stated. “That’s in no small part due to his travels.”

“Often, governments wanted to use him as a stamp of approval, but he would go and it would backfire on them,” the former guard explained. “He made sure that he would choose places he wanted to highlight,” and made a point of “saying really tough stuff,” making moral statements based on Church teaching rather than cooperating with a country’s political wishes.

Most notably, Pope John Paul II visited numerous countries in what was then the Soviet Bloc, including his native Poland. In choosing locations to visit and interacting with Soviet leaders, the Pope “was shrewd” but was also “sincerely pleasant,” Widmer said.

It is “very hard to fight” someone who is truly kind, he reflected, saying that the Pope’s love and support “for the human person” – including for the communist leaders themselves – made it difficult for officials in the Soviet states not to work alongside the pontiff.