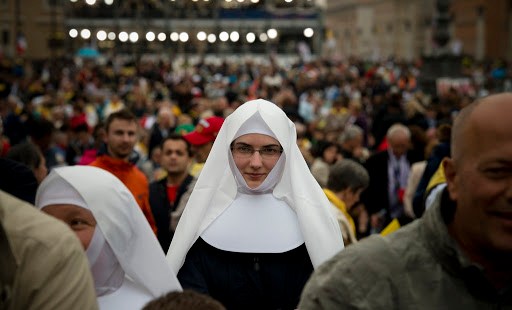 Previous Popes leave a legacy of appreciation for the dignity of women.

The newly-canonized John Paul II and John XXIII have drawn praise for sparking discussion within the Church on modern women and paving the way for what Pope Francis is addressing now.

On St. John Paul II’s contribution to the dialogue, Rome-based consecrated laywoman Ana Christina Villa reflected that “his magisterium has been so rich, so deep.”

“It is informing and will inform for years to come all the work for the dignity and vocation of women that is done in the Church but also in society,” she told CNA in an April 16 interview.

Villa, a consecrated laywoman with the Marian Community of Reconciliation and head of the women’s section for the Pontifical Council for the Laity, helped to design a new webpage for the council containing a compilation of the work both pontiffs have done on women ahead of their canonization.

The initiative promotes testimonies from women around the world describing how their lives have been positively affected by the new saints. Villa noted that it was researching the pontificate of John XXIII which initially inspired the women’s department of the council to begin a page completely dedicated to the saints’ efforts in developing the roles of women.

In his encyclical “Pacem in Terris,” John XXIII “wrote very beautifully” on “the growing presence of women in the society and life,” she observed, highlighting how because the historical document was released during the sexual revolution of the 1960s, “it was to be considered a sign of the times.”

During a time of “many changes” both culturally and in the Church, “He was already there as a father, as a brother in Christ, illuminating from the Catholic faith these new paths that were opening in the lives of women.”

John XXIII viewed the growing presence of women in all areas of life as “a very beautiful and positive thing,” however he also warned that this development “couldn’t happen in contradiction to the identity, the dignity and the vocation of women.”

These ideas, Villa continued, were “developed and deepened” with “a lot of richness in the large magisterium of John Paul II on women.” It is “as if Pope John XXIII was starting to see these phenomenons develop and with a very prophetic eye looked into the good things that were there, but also warned about the possible problems that come from those developments.”

Highlighting how it was John XXIII who first referred to this presence as “a sign of the times,” Villa then drew attention to the phrase coined by John Paul II, when he referred to “the feminine genius.”

Quoting one of the women who sent in their testimony for the website, the consecrated laywoman expressed that now “I think we are passing from being a sign of the times to feminine genius.”

“John XXIII called it a sign of the times, John Paul II said the feminine genius. He gave that name to that something that John XXIII was saying it was important for women not to forget or not to miss when engaging in public life or any environment in society.”

On John Paul II, Villa observed that he “gave us more deep thinking, theological, philosophical thinking on how to understand how to carry on these developments in a way that is more according to human dignity. So I think it is a natural development.”

What we see now from Pope Francis is “a lot of interest” in this area, she went on to say, noting that “He’s very concerned about this development and he’s calling very much for it to happen.”

“He has said very clearly that we have to build on what we already have, and we already have a lot of developments in the magisterium so far, but he sees that new challenges are coming, and certain things probably need to be better explained theologically.”

Calling to mind the pontiff’s frequent request for a new “theology of women,” Villa said that this “is one of these important signs, and it means developing these intuitions that John Paul II had into further clarity of the role and the participation of women in the Church.”

“For example, he has said (in) many ways this role of women in the Church is essential, the Church wouldn’t be the Church without women,” she continued, recalling the biblical figures of Mary Magdalene and Mary the mother of Jesus.