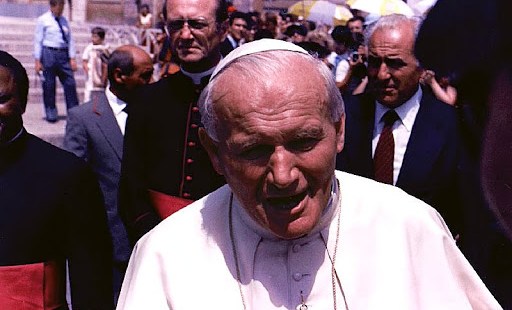 Pope John Paul II's enthusiasm for the vocation of marriage and family life is being carried forward today through an academic institute dedicated to studying his theology and related issues.

The Pontifical John Paul II Institute for Studies on Marriage and the Family “was born after the synod on the family that John Paul II had desired from the beginning of his pontificate,” Msgr. Livio Melina, the Rome institute's president, told CNA April 16.

The pontiff “did not want us to concentrate principally or mostly on the problems but above all on a complete and positive vision of the mystery of the family,” Msgr. Melina explained. He wanted the Institute “to offer to the Church a new and positive school of thought, rising up, regarding the family.”

In the years since its foundation in 1981, the Institute has “sought to take up that vision,” placing itself “in the path of this great legacy which he left us,” continued Msgr. Melina, whose own journey began when John Paul II personally handed him a copy of “Familiaris Consortio.”

He said that as a young priest, receiving the apostolic exhortation from the Pope's hands “was like receiving a mandate.” He went on to write his doctorate on the topic, and after several years working at the Vatican’s Congregation for the Doctrine of the Faith, took over leadership of the Institute in Rome.

The Institute's central location is in Rome; there are seven other major sections throughout the world in the U.S., Mexico, Spain, Brazil, Africa, India, and Australia. Other associated institutions are located in Lebanon, the Philippines, Korea, and Zambia.

John Paul II's perspective on marriage and family life can be described as “a vision of wonder and respect for the mystery of man and woman willed thus by God, and which…manifests in a small way the mystery of God and at the same time shows the mystery of man,” reflected Msgr. Melina.

This attitude of reverence and respect offers an antidote to a kind of “puritanism” present in many cultures, he suggested. “John Paul II, in his catechesis, in his testimony, has completely overturned this situation,” offering “a Christian vision” of the body and human sexuality “that values human love” as a “gift of self.”

“He put (all these human things) in light of the hope of the revelation of God, and in this he exalted… the relationship between man and woman, the possibility of becoming a gift of self, and in this gift also becoming a font of giftedness also for children.”

Sr. Alessandra Diriart teaches sacramental theology at the Institute. She noted that John Paul II's theological legacy also includes his “fascination” with the initial chapters of Genesis, which tell the story of the creation and reveal the meaning of human existence.

“For John Paul II, the person finds himself or herself, his or her 'mystery,' his or her 'who I am,' only in the gift of self,” the sister reflected. “This is accomplished through either marriage between man and woman or through the total gift of self in virginity for the Lord, which is a total gift of the person, body and soul.”

Professor Oana Gotia, who teaches moral theology at the Institute, recounted the focus of many of John Paul II's Wednesday audiences as “the beauty of the love between man and woman.”

These audiences which have been collected and popularized under the title of the “Theology of the Body,” emphasize “the dignity of the body as being always a personal body – not something to be objectified but being part of who we are, and part of our vocation to love, to accept love, to welcome love.”

The Institute's focus on John Paul II's positive vision of human love has a real impact on the lives of its students.

Eleanora Stefanya received her license degree in theology and is now pursuing her doctorate there. “For me personally, studying at the Institute was a great gift in understanding myself, understanding what I'm called to,” the laywoman from Georgia said.

Studying alongside priests and religious has brought about “beautiful friendships with people from all over the world,” she reflected, “because at the end, we have the same vocation, the vocation to love.”