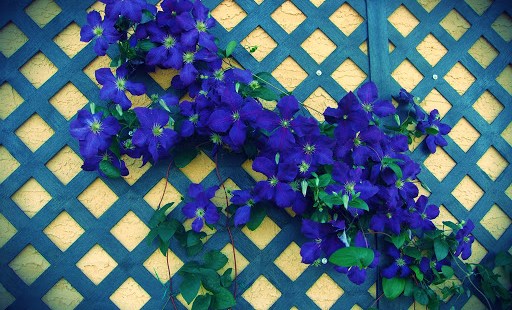 The vine and trellis.

C.S. Lewis once observed, “How monotonously alike all the great tyrants and conquerors have been: how gloriously different are the saints.”

Each saint is unique because he or she is an ordinary individual brought to extraordinary fulfillment by God’s power. A saint is a person who has become all he was created to be and is therefore more gloriously and uniquely alive than those who follow the dread and dull path of the Dark Lord.

In thinking about the canonization of Pope St. John XXIII and Pope St. John Paul II it occurred to me that these two popes who were typified as “bookends of the Second Vatican Council” also epitomize in their own personalities the two key words of the council: the Italian word aggiornamento and the French word resourcement.

Aggiornamento is the word for openness and optimism. The Second Vatican Council, started by St John XXIII was an opportunity for the church to engage with the modern world in a positive spirit of affirmation, vitality and dialogue. The Pope’s famous speech on a moonlit night with its marks of joy and personal affection symbolize this principle of the church in the modern world. The genial and joyful Pope John incarnated the principle in his teaching and even in his physique and style.

Here was an avuncular, roly poly pope – a lovable joker who was always amazed that a poor boy from a peasant background could rise to be the vicar of Christ. Pope John’s natural style, warm heart and positive embrace showed the world a new kind of Catholicism – one with the windows wide open – one with a lovable papa who was waiting with arms open wide to welcome all the prodigals home.

If John XXIII typified the principle of aggioramento, Pope St John Paul II stands very well for the spirit of resourcement. In the midst of the open-heartedness, the warmth and welcome, the principle of resourcement is a reminder that the Catholic faith also has structures, doctrines, dogmas and disciplines. Resourcement was the idea that the Catholic religion must be rooted in the past, in the early sources of Christianity. Resourcement is the reminder that the future must be built on the foundation of the past and that all progress in the Catholic religion must be continuous with what has gone before. In Ratzinger’s words there must be a “hermaneutic of continuity.”

John Paul II showed how that resourcement ideal could be lived out. His was not a resourcement of the scholar or hermit. Nor was his allegiance to the great tradition hidebound or legalistic. He stepped onto the world stage as a vigorous fifty eight year old who had survived the Nazi and communist regimes. He was a philosopher, poet, playwright, actor and outdoorsman. Here was a man living life to the full–showing how the great tradition could be lived in the modern world.

While he is often perceived as a conservative, that conservatism was his instinct and insistence that change in the church could only be rooted in those things that cannot change.

These two principles are vital for a healthy Catholic life at both the global and the individual level. We need to defend that which never changes so that we can change that which must be changed. Aggiornamento and resourcement are two trends in the church and in the spiritual life. The first is the free flowing, open hearted and dynamic life of the spirit. The second is the stable, structured and disciplined life of the church. Both are necessary for the church and the spiritual life to be balanced and thrive.

Aggiornamento without resourcement is like a river with no banks. A river without banks is not a river it is simply a flood–shallow and destructive.