Tens of Thousands Expected for Italy’s March for Life 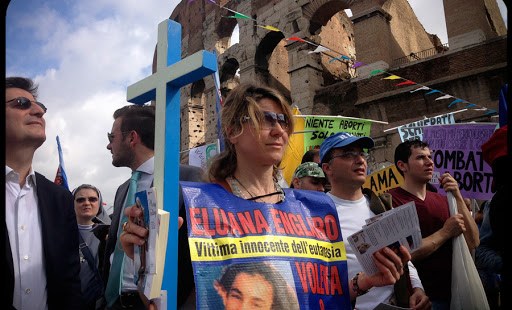 The organizer credits the U.S. March for Life for inspiring its Italian counterpart.

The Italian March for Life expects tens of thousands of attendees at its fourth march to support what organizer Virginia Coda Nunziante called “the first right for a human being.”

“If a human being doesn’t receive life, he won’t receive any other rights,” Coda Nunziante told CNA April 23.

The march will begin May 4 at Rome's Piazza della Repubblica. Participants will begin to gather at 8 a.m. ahead of the March for Life’s launch at 9.

Coda Nunziante credited the U.S. March for Life for inspiring its Italian counterpart.

Italian pro-life organizers found that going regularly to the Washington, D.C. event was “an extraordinary occasion to meet pro-life people,” she said. That march gave them the idea of “doing something similar in Italy.”

The event helps pro-life advocates to realize that they are not alone.

“We are a big number of people thinking in the same way, and we can win the fight,” Coda Nunziante said.

Italy’s abortion law has been in place since 1978. It allows women to abort their unborn babies up to 12 weeks into pregnancy for health, economic, social, or family reasons. Abortions are taxpayer-funded.

Coda Nunziante said the country “really couldn’t understand” the first March for Life, since it was the first time that people went “into the public square” about the issue. The news media were “very much surprised.”

“They said this is astonishing. They gave the news about the big result that we had last year. I think they never expected such a reaction.”

The Italian event also drew inspiration from Benedict XVI’s 2011 remarks to the U.S. bishops’ conference advising Catholics to “go into the public square” and not leave it to “their enemies,” she added.

The Italian event is drawing international interest, a fact Coda Nunziante credited to Rome’s importance as the center of Christianity.

Italy’s 2013 March for Life enjoyed a surprise visit from Pope Francis. He drove to the March after celebrating Sunday Mass and praying the Regina Coeli.

Coda Nunziante said that Italians have always valued large families and Italy is a place where “children are always very much loved.”

“Italy is a country of families, more perhaps than other countries.”

She noted that the country’s low birthrate has had an impact on the entire society, an event non-Catholics are also realizing

She suggested that major Italian media are realizing that it is “important to encourage life” for “the future of the Italian people.”

Coda Nunziante said she noticed this change taking place after the second and third pro-life marches.

Though some commentators say abortion is a right, she reported, they are now saying “nevertheless, we have to encourage women to have children.”

“It’s like they’re changing, slightly, their mind. The march is important for that.”

She said the march is also important to stop worse laws from taking effect, such as the expansion of euthanasia.

Other pro-life events will take place in Rome around the time of the March for Life.

On May 3, the day before the march, a conference for international pro-life leaders will take place in Rome at St. Pius X Hall on Via della Conciliazione at 2:30 p.m. Keynote speakers include Cardinal Raymond Burke, prefect of the Apostolic Signatura, and Catholic commentator George Weigel.