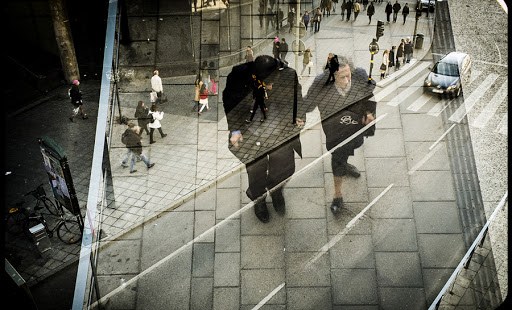 Finding a sanctuary of peace in the midst of noisy, crowded Los Angeles.

Don’t ask me why, with my hermit tendencies, I’ve chosen to live in Los Angeles, a city of nine (or maybe it’s ten now?) million people. It could be I’m subconsciously trying to re-create my family of origin: one of eight, I learned young the trick of cultivating an interior zone of silence while surrounded by people.

Then again, it could be I’m simply a sociopath.

Whatever the case, I’m constantly looking for places to hide: secluded gardens, deserted parks. Nothing makes me happier than spotting some tiny leaf-covered niche tucked away beneath a shedding, camouflage-like tree, or a fountain at the far edge of a park, or an out-of-the-way set of steps on which to settle in and listen to the birds. A bench is good, trickling water is good, trees or flowers are good, but the essentials are coffee, solitude and a book.

Recently, I made a real find. I was on the third floor of the downtown Central Library, gazing out a third-floor window, when down below I spotted a narrow, patio-like area sandwiched in between two towering buildings to the south. I could make out an alienating modern steel sculpture, a metal waste receptacle and, best of all, but a single person, staring into space in an abstracted posture I knew well.

I flew downstairs, checked out my books, grabbed a Starbucks and ran across to investigate. Heaven, heaven, I chanted to myself as I settled in on an aluminum bench, took a sip, and opened Dostoevsky’s Notes from the Underground.

One Saturday night soon after, my friend Glenn and I were leaving a downtown gallery opening when I decided to share my find. “I’ll show you this really cool place,” I told him as we walked down Olive. “I’ll bet hardly a hundred people in the whole city know about it.” At the library we cut in, stepped over a drunk passed out on the sidewalk, and made our way to the narrow walkway back. As we drew near, I tenderly took Glenn’s hand, as if approaching a shrine. “Check it out,” I breathed, gazing into the grotto-like darkness. “In the middle of the day you can go in there and it’s…quiet.”

A few days later I overheard him reporting to a mutual friend, “My God, the poor woman has managed to find the only sunless spot in all of L.A. Apparently she goes in there and drinks coffee…”

The next week, I drove up to the thousands of acres of urban wilderness known as Griffith Park and hiked to another of my hideouts: Dante’s Peak, it’s called. Hunkered beneath a patch of fennel, I opened a volume of Japanese haiku. “When in Kyoto…I long for Kyoto,” Bāsho had written. I put down my book, inhaled the smell of eucalyptus, and gazed off into the middle distance, thinking how I am always longing to be some place I’m not, for things to be different than the way I myself make them: to both live in a major city and enjoy the quiet of the country, to drink coffee and yet be calm, to be by myself and yet connect with other people.

On the way home I stopped off at Immaculate Heart of Mary. IHM is an old neighborhood church  in East Hollywood. It’s on Santa Monica Boulevard, in little Armenia, and its parishioners are mostly Filipino and Hispanic. Even in the middle of the day, there are always people in there–sitting quietly, praying, quietly chatting. I found a pew near the back and knelt. I didn’t think about much. I didn’t look much at the other people but I knew and was glad they were there. There, high above the altar, hung Christ on the cross: symbol of the fact that no matter how far we run, how hard we try to hide, we can never hide from our own conflicted selves.

He looked a little sad up there, as if he could use some company. So for awhile I was in Kyoto without longing to be in Kyoto; I was alone but I wasn’t alone; for awhile we all sat together: them, Him, me.