An Archbishop of Destiny 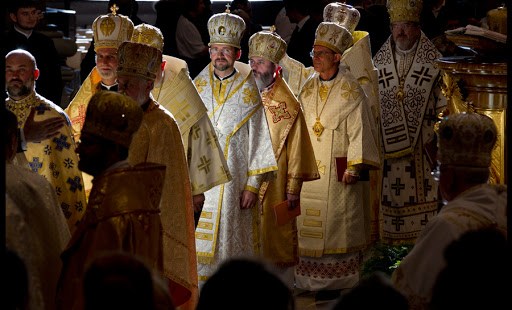 Major-Archbishop Shevchuk, of the Ukrainian Greek Catholic Church, is no naïf.

When we first met in April 2011, what initially impressed me about Sviatoslav Shevchuk was his almost preternatural calm: which was striking, in that, less than a month before and still a few weeks shy of his 41st birthday, Shevchuk had been elected Major-Archbishop of Kyiv-Halych and head of the Ukrainian Greek Catholic Church—the largest of the Eastern Catholic Churches, Byzantine in liturgy and governance while in full communion with the Bishop of Rome.

Shevchuk had been snatched out of Buenos Aires, where he was bishop to the Ukrainian diaspora there (and a friend of the city’s Latin-rite archbishop, Jorge Mario Bergoglio), and thrust into the position previously filled by some of the most formidable figures in modern Catholic history: Andrey Sheptytsky, the Ukrainian Catholic leader who did more than perhaps anyone else to shape Ukrainian cultural self-awareness in the first four decades of the 20th century; Josyf Slipyj, Sheptytsky’s successor and the model for the “pope from the steppes” in The Shoes of the Fisherman, who spent more than a decade in Gulag camps; Lubomyr Husar, who became the most widely respected figure in independent Ukraine after the Soviet crack-up in 1991. In 2011, when we had a wide-ranging conversation in Rome, Major-Archbishop Shevchuk might have looked forward to three and a half decades of work building his Church in Ukraine and strengthening the links between the motherland and Ukrainian emigres around the world. (He might also have expected, not unreasonably, to become the youngest cardinal in a century.)

Then events took over, as they have a tendency to do.

For the past six months, Major-Archbishop Shevchuk has been a key figure in the Maidan revolution of dignity that first demanded a return to the elementary decencies of public life in Ukraine, and then set about building a new Ukrainian political order. After the Russian invasion of his country, Major-Archbishop Shevchuk has worked tirelessly to inform the world of the truth of Ukraine’s plight and to maintain, under extreme pressure, the new Ukraine’s commitment to the civic virtues that inspired the Maidan movement in the first place.

So I was all the more impressed that Major-Archbishop Shevchuk was as calm as ever when he called me in Rome on the evening of April 30. We were both in the city for the canonizations of John XXIII and John Paul II, and while our schedules hadn’t permitted another meeting, the archbishop wanted to talk over his country’s dire situation—and to send a message to Russia and the Russian Orthodox Church.

The message to Russia was simple:

We in Ukraine wish to be good neighbors. Do not attack us. We are not your enemies, and we have no aggressive intentions.

The message to the Russian Orthodox Church, whose leaders had too often been tacit or explicit mouthpieces for the Putin government’s propaganda and lies, was similar:

The Ukrainian Greek Catholic Church is not an enemy of the Russian Orthodox Church. We are your brothers; we have been born from the same spiritual womb. From the holy city of Kyiv, where our peoples were baptized, we are sending you a message of peace. Do not let politicians provoke hatred and bloodshed among us.

Major-Archbishop Shevchuk is no naïf. He understands that the Putin propaganda machine aims at nothing less than deconstructing the very idea of “Ukraine” as an independent nation, expressive of a distinctive culture and worthy of independent statehood. Thus while crisply describing the Russian “psychological” attack that aimed to “divine and disintegrate” his country, his bottom line was that “Ukraine does exist and will exist,” and is “prepared” spiritually to resist whatever may come. That spiritual resistance is, of course, made possible by leadership. And both leadership and resistance are strengthened by intercession; as Major-Archbishop Shevchuk put it, “St. John Paul II will protect us and protect the world from new iron curtains and new Berlin Walls.”

All of which is deeply moving, even as it throws into sharp relief the fecklessness of Washington, Brussels, London, Paris, and Berlin in addressing Vladimir Putin’s mendacity, aggression, and brutality.