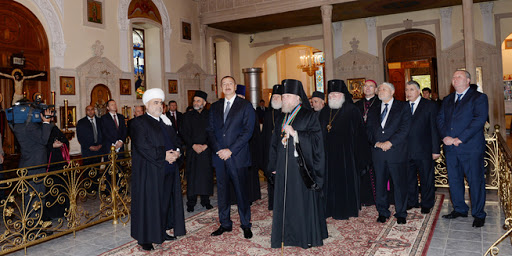 When we think about religious tolerance and peaceful coexistence between members of different religions, we usually think of wealthy and prosperous countries such as the US, Australia, or Sweden, where immense religious diversity and high levels of care for citizens’ rights prevent tensions between religious groups from arising. However, a recent report presented at the European Parliament has revealed that Azerbaijan, a much smaller and younger nation, has achieved significantly high level of religious tolerance, so much so, that it surpasses many advanced and wealthy countries in both the East and the West.

On November 13, 2013, three days before the International Day of Tolerance, the European Parliament presented a report on “Religious Minorities in Azerbaijan: From History to Independence,” which was prepared by the international organization known as “Human Rights without Frontiers (HRWF).” The report, which was presented by HRWF chairman Willy Fautre, was based on studies conducted during the organization’s numerous visits to Azerbaijan. The HRWF officials studied the living conditions and treatment of Eastern Orthodox, Jewish, Protestant and Catholic communities in Azerbaijan.

Representatives of all these communities participated in the studies and unanimously agreed that the Azerbaijani government, as well as people, have demonstrated the highest level of friendliness, support, and tolerance towards their religious affiliations, and that their communities have always felt welcome and safe in Azerbaijan. 96% of Azerbaijani population is Muslim; Azerbaijan is a secular republic where the state is entirely separated from religion. The Azerbaijani Constitution outlaws any type of political, racial, ethnic, national, cultural, religious, or sexual persecution in Article 109, and in 1992, a specific amendment of “Freedom of Faith and Religion” was passed to reinforce the concept of religious tolerance. Today, Azerbaijan is home to many ethnic and religious groups.

Since the institution of the Azerberjan state in 1991 there has been a growing recognition of the Christian presence in its country. Pope John Paul II’s official state visit in May 2002 was a particularly significant step, where he was invited to say Mass in the palace, to which thousands of people attended. Just a few short years afterwards, President Geydar Aliev donated a large plot of land to the Catholic community where they finally built Azerbaijan’s first Catholic church in February 2007, which is named in honor of the Virgin Mary-s Immaculate Conception.

Friendly relations between Azerbaijan’s government and the Vatican have continued during the presidency of Ilham Aliyev. The Vatican’s Foreign Minister Giovanni Lajolo, on a state visit to the country, expressed his satisfaction with the “level of friendly communications between Azerbaijan and the Vatican." He praised the nation as “a place where many religions and cultures merge."

Although the population of Azerbaijan is just nine million people, and the country itself is only 86.6 thousands square kilometers, it has an impressive diversity of religions and nationalities coexisting in peace with the Muslim Azerbaijani majority, awarding it praise by the European Parliament.