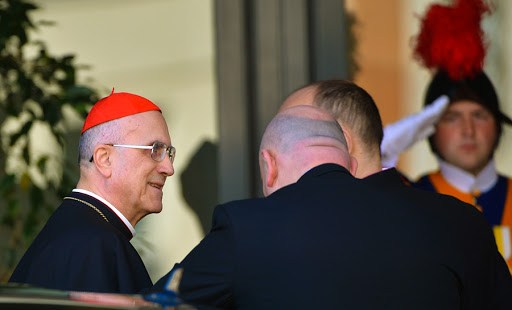 Former Vatican Secretary of State Cardinal Tarcisio Bertone has denied allegations that he embezzled millions of Euros from the Vatican Bank, and the Vatican has issued a statement saying there is no criminal investigation into the 79-year-old cardinal.

"With regards to the news circulating at this time, I affirm that there is no criminal investigation being carried out by the Vatican judiciary against Cardinal Tarcisio Bertone," said Vatican spokesman Father Federico Lombari, in a brief statement issued this afternoon.

The German tabloid
Bild published an article based on what they said were Vatican sources, alleging that the Holy See had launched an investigation into Bertone, who served as Secretary of State from 2006 to 2013. It claims the Vatican suspects that the Salesian cardinal, who came under fire for mismanaging Vatican communications under Pope Benedict XVI, stole 15 million Euros from Vatican accounts.

The money in question was apparently intended for a television production company, Lux Vide, with which the cardinal has ties, according to
Bild. The report alleges that the shady transaction took place through a convertible bond and proceeded despite resistance from the Vatican Bank and under pressure from Bertone.

But Cardinal Bertone, in an
interview with ADNKronos, denied any wrongdoing. He said that the proceedings of a December 2012 meeting show that an agreement between the company and the bank was discussed and approved by his supervisory commission and by the superintendence board, according to a translation by La Stampa’s
Vatican Insider.

The allegations about Bertone came out a day after the Vatican’s financial watchdog agency said that "corrective measures" were necessary at the Holy See’s troubled bank to continue the path toward financial transparency and compliance with international anti-money laundering norms, according to AP.


Financial Intelligence Authority Director Rene Bruelhart said a long-awaited investigation of the bank, known as the Institute for Religious Works, included looking into its practice of not disclosing the names of the true account holders in its transactions with Italian banks.

He said the main problems identified in the inspection, called for by European anti-money laundering evaluators, concerned the bank’s procedures for identifying high-risk activities, and that more detail was necessary.

Bruelhart spoke to reporters after his annual report showed a spike in the number of suspicious financial transactions being reported last year: 202 in 2013 compared with only six a year earlier and just one in 2011. Five of those 202 were referred to Vatican prosecutors for possible investigation.

Bruelhart stressed that the spike didn’t mean that more illicit activity took place last year, just that new laws and procedures put in place in 2013 were working to flag potentially problematic transactions that may be innocent or may require further investigation.

The majority of the 202 new cases stemmed from transactions at the Vatican bank, which is reviewing each of its accounts to make sure it is clean and that the bank has complete information on the client.

"We are not perfect yet. We are not super-good yet. I think we are on the right track," Bruelhart said of the process. "But there is still quite a bit of way" to go.