The Kingdom of Jordan awaits Pontiff's arrival in hope and joy.

Pope Francis is about to embark on his much anticipated pilgrimage to the Holy Land. He is starting the intense, 3-day trip off with the Kingdom of Jordan.

The Pontiff is set to arrive in Amman at 13.00 where he will be welcomed by the King and Queen, and will celebrate mass in the Capital’s largest stadium. He will also visit the river Jordan where Christ was baptised.

On Thursday Queen Rania, who describes herself as “a mum and a wife with a really cool day job” expressed her excitement for Pope Francis’ visit to Jordan.

“1999… The first time I had the honor of meeting Pope Saint John Paul II. Looking forward to welcoming Pope Francis to Jordan on Saturday!”

1999… The first time I had the honor of meeting Pope Saint John Paul II. Looking forward to welcoming… http://t.co/q8FycPziPj

Her post was accompanied by a photo of her all dressed in white (just to complete the vision), meeting the then man-in-white, St. John Paul II. 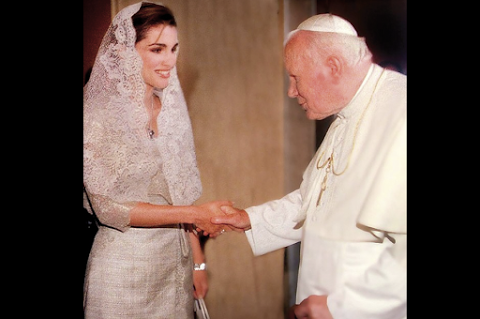 In honor of John Paul II’s visit to the Kingdom on 20 March 2000, an olive tree was planted at the Byzantine chapel at Mount Nebo, which the saint watered when he arrived. The sign left by it in Latin reads: “the olive tree is a symbol of peace.”

Pope Benedict XVI also paid the Royal Family a visit during his pilgrimage to the Holy Land, meaning that Pope Francis’ arrival will reinforce and continue a longstanding relationship and respect between Jordan and the Holy See.

Jordanian government spokesman Mohamed Momani at a press conference on Wednesday also expressed the hope that the people of Jordan retained in the visit of the Holy Father, and for the process of peace and stability that it might bring throughout the region.