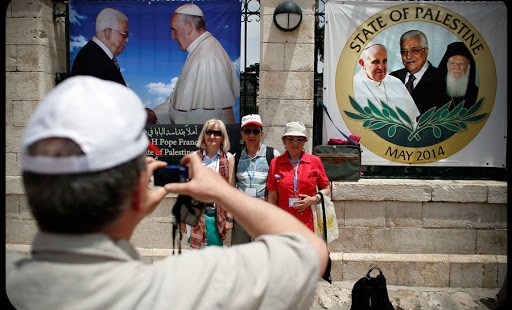 Why is Pope Francis going to the Holy Land with a Jew and a Muslim?

Why is Pope Francis going to the Holy Land accompanied by a Jew and a Muslim?

Is he saying all religions are equal? Is he proposing that all religions are simply different paths up the same mountain? Is he watering down the Catholic faith, compromising to appease Jews and Muslims and present a peaceful face where there is no peace?

In a typically personal and unexpected decision, the Pope asked two fellow Argentinians to accompany him. Rabbi Abraham Skorka and Islamic studies professor Omar Abboud are trusted old friends. By inviting them to join him on his visit to the Holy Land Pope Francis is not only making a gesture of solidarity with leaders of Judaism and Islam, but in doing so he is — through his actions — revealing the teaching of the Catholic Church regarding other religions and showing the best way for interfaith discussions to take place.

A few months ago the internet was abuzz with a video recorded on a cell phone by a Protestant pastor. Tony Palmer, an Evangelical Charismatic who worships in the Anglican tradition, was similarly an old friend of Archbishop Bergoglio. After he was elected to the papacy Pope Francis called his friend and asked how he might help build bridges with the charismatics. As it happened, Tony was going to a large charismatic conference the next week and on the spot asked Pope Francis to record a short video greeting for the conference participants. Pope Francis extended warm greetings to the Pentecostal Protestants and spoke of the love of Christ which joined them together.

The Pope’s visit to the Holy Land with Skorka and Abboud is a similar gesture. Pope Francis realizes that Jews and Muslims of goodwill eschew terrorism and extremism. They love their families and with Catholics they uphold the sanctity of human life. They want peace in their home, peace in their countries, peace in the world. Catholics, Jews, and Muslims revere the Sacred Scriptures and want to seek the face of God through prayer, obedience, and respect of others.

By going to the Holy Land with a Skorka and Abboud, Francis is saying to the world, “We do not have to kill and persecute one another. Jews, Christians and Muslims can work together for the good of humanity, we can work together to fight injustice, poverty and oppression. We can work against the powers of darkness to uphold the sanctity of human life and the cause of peace and justice in the world!” By walking together with them in a public gesture of solidarity he can echo the words of Pope St John Paul and the Lord who say, “Do not be afraid!”

The Catechism of the Catholic Church teaches that Christians, Jews and Muslims share a common human longing for God. Although Catholics believe that the fullness of God’s truth is found in the Catholic religion, still we recognize the beauty, truth and goodness that resides within the other world religions, and we recognize Catholics share more with the monotheistic faiths of Judaism and Islam than we do with other religions.

Pope Francis’s shared pilgrimage to the Holy Land is a reminder that Catholicism is an affirmative faith. We affirm all that is good, beautiful, and true wherever it is found. The Catechism teaches that, “The Catholic Church recognizes in other religions that search, among shadows and images, for the God who is unknown yet near since he gives life and breath and all things and wants all men to be saved. Thus, the Church considers all goodness and truth found in these religions as ‘a preparation for the Gospel and given by him who enlightens all men that they may at length have life’” (843).

But the Catechism also reminds us that Catholics still have a responsibility to share the fullness of the gospel of Jesus Christ. The Great Commission still stands. “It is from God’s love for all men that the Church in every age receives both the obligation and the vigor of her missionary dynamism,” the Catechism holds. “Indeed, God ‘desires all men to be saved and to come to the knowledge of the truth’…the Church, to whom this truth has been entrusted, must go out to meet their desire…Because she believes in God’s universal plan of salvation, the Church must be missionary” (851).

The message from Catholics to Jews and Muslims of goodwill is one of openness and friendship. Pope Francis’s friendship with Skorka and Abboud reveals the practical way forward. Catholics should reach out to Muslims and Jews saying, “We hold you in esteem as fellow human beings and religious searchers. Let us discuss how Jesus Christ fulfills that without destroying it. Let us move together down roads that converge and as we walk together let me tell you about Jesus Christ who is the Alpha and the Omega, who is both the beginning of our search and the end of our journey.”