The Wisdom of Calvin and Hobbes 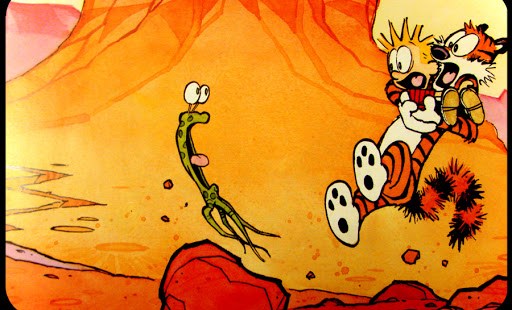 Documentary explores the world of the beloved comic strip and its reclusive creator.

When I think about what first got me interested in philosophy, a somewhat surprising source comes to mind: Bill Watterson’s comic strip “Calvin and Hobbes.”

I don’t remember when I first met that imaginative (and occasionally imperious) boy and his tiger best buddy. One of my earliest memories of the strip is of a friend holding tight to his own ribs and laughing like a lunatic over one of the book collections – so maybe it was through imitation that I came to read the comics. I wanted in on that friend’s insane joy.

I would also have my own hysterical laughing fits over Calvin’s antics down through the years. More than a few times there were also some tears. As every fan knows, the strip is filled with both the joys and traumas of youth, and is every bit as heart-rending as it is hilarious.

But I continue to read “Calvin and Hobbes” to this day. This is an outlier, pure and simple; there are no other books that I read now at 28 that I also read at 18 and 8, and it’s because Watterson packed an otherwise playful story with sophisticated commentary on society, art, culture – even existence itself. There were jokes in “Calvin and Hobbes” I almost certainly didn’t get when I was younger that I get now. (And the reverse is probably true, too.) His comic shatters demographic divisions: the strip is for everyone, in all ages and stages.

In fact, a new documentary – Dear Mr. Watterson: An Exploration of Calvin & Hobbes – looks “to the readers and fans of ‘Calvin & Hobbes’ to tell the story of the strip and its creator.” Unfortunately, director Joel Allen Schroeder really had no other choice. Watterson is the J.D. Salinger of comics: not only did he turn down tens of millions of dollars in revenue by refusing to merchandise “Calvin and Hobbes,” he also hasn’t conducted an interview or made a public appearance in years.

A string of cartoonists and fans interviewed for the film make mention of the philosophical sophistication of the strip’s writing. Throughout its 10-year run, Watterson made Calvin and Hobbes his mouthpiece for profound insights in aesthetics, ethics, epistemology, and existentialism. As the creator of “Stone Soup,” Jan Eliot, explains: “His approach at philosophy and representing the human condition was something that was always bigger than just a little comic strip. The conversations had so many layers of meaning, and if I could even come close to that I would be absolutely thrilled.”

But for Thomas Aquinas (and medieval thinkers in general),  “philosophia ancilla theologiae” – “philosophy is the handmaid of theology” – and I think we see that in “Calvin and Hobbes.” The central characters themselves are named after two great religious thinkers, John Calvin and Thomas Hobbes. Calvin’s teacher, Mrs. Wormwood, is a subtle nod to C.S. Lewis’s “The Screwtape Letters,” and Calvin is constantly ruminating on the existence (and non-existence) of God. Philosophical questions open Calvin and Hobbes to an encounter with theological questions.

No one has seen this more clearly than Richard Beck, who penned a series of theological interpretations of the strip titled “The Theology of ‘Calvin and Hobbes’.” From St.  Augustine through Charles Taylor’s work, A Secular Age, Beck looks to several great thinkers to help unpack the themes of sin, grace, freedom, death, and salvation that fill Watterson’s narrative. My favorite piece may be “Let’s Go Exploring!,” which reads the final memorable frame of “Calvin and Hobbes” as a leap in outlook from Augustine to the Church Father Irenaeus.

Philosophy has been reduced in recent centuries to a handmaiden of science, a mere broom to sweep for clarity ahead of the march of empirical verification. Neil DeGrasse Tyson, the host of Fox’s “Cosmos,” typifies the modern outlook when he recently disparaged philosophical questions as “a pointless delay in our progress.”