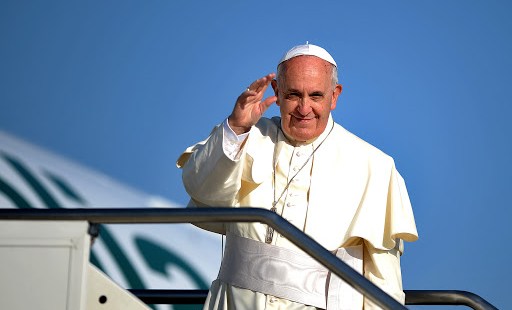 © FILIPPO MONTEFORTE / AFP
ITALY, Fiumicino : Pope Francis waves from the top of the stairs leading to the plane as he leaves to his trip to the Holy Land on May 24, 2014. Pope Francis arrives in Jordan Saturday at the start of a Middle East tour aiming to boost ties with Muslims and Jews as well as easing an age-old rift within Christianity itself.

Pontiff Says Syrian conflict has gone on for ‘too long.’

AMMAN, Jordan (AP) — Pope Francis arrived Saturday in Jordan, kicking off a three-day trip to the Middle East that will see him get a firsthand look at the plight of Syrian refugees and witness the toll the civil war next door is taking on Jordan.

In his first address there, delivered in Al-Husseini Royal Palace in the Jordanian capital, he called for a quick solution to the problem in neighboring Syria.

"Jordan has offered a generous welcome to great numbers of Palestinian and Iraqi refugees, as well as to other refugees from troubled areas, particularly neighboring Syria, ravaged by a conflict which has lasted all too long," he said, in the presence of King Abdullah II and Queen Rania and their family, as well as other officials of the Hashemite kingdom and religious leaders. "I thank the authorities of the Kingdom for all that they are doing and I encourage them to persevere in their efforts to seek lasting peace for the entire region. This great goal urgently requires that a peaceful solution be found to the crisis in Syria, as well as a just solution to the Israeli-Palestinian conflict."

The pontiff’s plane touched down at Amman’s Queen Alia International Airport, where an honor guard, Catholic leaders and Prince Ghazi bin Mohammed, King Abdullah’s chief adviser for religious and cultural affairs, met him. Pope Francis talked for a moment with Prince Ghazi at the airport before entering a simple, four-door sedan and heading off to the king’s palace, a group of motorcycles riding alongside him. Small groups of people waving Jordanian and Vatican flags cheered him as he passed.

At the palace, Pope Francis met with King Abdullah and Queen Rania. Outside, traditionally dressed soldiers marched in formation.

On the flight to Amman, the pope told journalists that the trip would be "challenging," but rewarding.

"My heart beats and is looking to love," he said.

Despite a cold and fatigue that forced him to cancel some recent appointments, Francis seemed in fine health on the flight and greeted each of the reporters traveling with him one-by-one, even posing for a "selfie" photograph.

Before his arrival, those waiting at the airport in Amman felt a magnitude 4.1 earthquake that struck in Israel near its border with Jordan, according to the U.S. Geological Survey. The earthquake caused no damage or injuries.

Francis is due to celebrate Mass on Saturday in Amman’s International Stadium. The Vatican expects some 25,000 people to attend, many of them Palestinian, Syrian and Iraqi refugees.

Later, he will meet one-on-one with refugees and disabled children at a church in Bethany beyond the Jordan, which many believe is the traditional site of Jesus’ baptism.

Christians make up about 5 percent of Syria’s population, but assaults on predominantly Christian towns by rebels fighting against President Bashar Assad’s rule have fueled fears among the country’s religious minorities about the growing role of Islamic extremists in the revolt. Christians believe they are being targeted in part because of anti-Christian sentiment among Sunni Muslim extremists and partly as punishment for what is seen as their support for Assad.

The Vatican secretary of state, Cardinal Pietro Parolin, said Francis wants to offer comfort to all Christians who live in the region and encourage them to stay.

"These Christians are living stones, and without their presence, the Holy Land and its holy sites risk becoming a museum," Parolin told Vatican Television on the eve of the trip.

Jordan last month opened a third camp for Syrian refugees, a stark indication of the strains the civil war is creating for the country. The sprawling facility is designed to accommodate up to 130,000 people and potentially become the world’s second-largest refugee camp. Jordan is hosting 600,000 registered Syrian refugees, or 10 percent of its population. Jordanian officials estimate the real number is closer to 1.3 million.