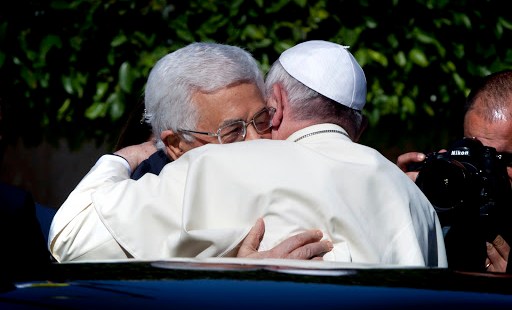 The leaders of Israel and Palestine, locked in a gridlock to find a way toward peaceful coexistence, have accepted an invitation from Pope Francis to join him in prayer at the Vatican next month.

The Holy Father, before beginning the Regina Caeli in Manger Square, Bethlehem, today, turned to the two leaders and said:

"In this place where the Prince of Peace was born, I wish to invite President Mahmoud Abbas and President Shimon Peres to come together with me to an intense prayer, asking God for the gift of Peace. I offer my house at the Vatican to host this prayer meeting."

The Pontiff stretched out his arm in friendship to both leaders, calling for peace on both sides, for wounds to be healed and stability to be fostered in a land that has seen so much conflict and sorrow.

Both Israeli and Palestinian president offices confirmed immediately that they had accepted the invitation.

Peres’s office issued the following statement: "We welcome Pope Francis’ invitation to the Vatican. President Peres has supported and will continue to support all avenues to bring about peace."

Peres, a 90-year-old Nobel Peace laureate, is set to step down over the summer, and the meeting would take place shortly before he leaves office.

Peres has been a fervent support of Mideast peace efforts, and the independent-minded Israeli president, whose job is largely ceremonial, risks upsetting Prime Minister Benjamin Netanyahu with the move.

Netanyahu has expressed anger with politicians that have reached out to Abbas at a time when the Palestinian leader is reconciling with the Islamic militant group Hamas. Israel considers Hamas a terrorist group.


Associated Press writers Mohammed Daraghmeh in Bethlehem and Daniel Estrin in Jerusalem contributed to this report.