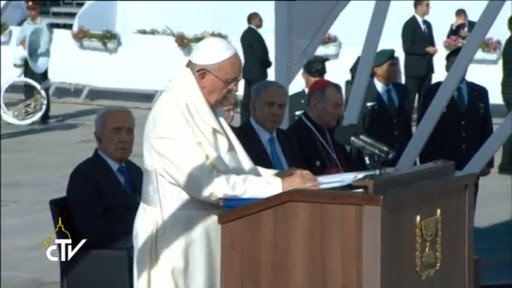 JERUSALEM (AP) — Pope Francis on Sunday strongly condemned the shooting attack at a Jewish Museum in Brussels in his welcome address on arriving in Israel.

An Israeli official says two Israelis were killed in the shooting at the Jewish Museum in Brussels. The attack left three people, including an Israeli couple, dead and a fourth seriously injured. Belgian police have arrested a suspect and were searching for a second.

Paul Hirschson, an Israeli Foreign Ministry spokesman, said Sunday that the victims were a couple in their 50s from the Tel Aviv area. He says the victims’ families have been notified of their deaths and that Israel is arranging to fly their bodies home.

Belgian officials say three people were shot dead and a fourth seriously wounded in the attack Saturday. Police have detained one suspect and are looking for a second.

Hirschson says the attack appears to have been directed at Israelis or Jews, but Israel is awaiting conclusions from the Brussels authorities.

He says: "An Israeli couple visiting the Jewish Museum leaves too much to the imagination."

Elsewhere, France’s interior minister says that two Jewish men were attacked as they left a synagogue in the Paris area.

Bernard Caseneuve ordered police around France to increase security at Jewish houses of worship and other Jewish establishments, according to a statement Sunday. There were no immediate details on the Saturday night attack on two men leaving the synagogue in Creteil, southeast of Paris.