Pope Francis spoke to Palestinian authorities on Sunday morning in Bethlehem, where he voiced support for a Palestinian state.

His actions, as well as the official Vatican program, too, spoke volumes: While previous popes came to the West Bank after first arriving in Tel Aviv, Israel. Francis, who began his three-day pilgrimage to the Holy Land yesterday in Jordan, landed at a Bethlehem helipad. He immediately headed into an official welcoming ceremony and meeting with Palestinian President Mahmoud Abbas.

In its official program, the Vatican referred to Abbas as the president of the "state of Palestine," and his Bethlehem office as the "presidential palace."

In November 2012, the United Nations General Assembly overwhelmingly recognized a "state of Palestine" in the West Bank, Gaza and east Jerusalem — lands Israel captured in the 1967 war — as a non-member observer. The recognition still has little meaning on the ground, with Israel remaining in full control of east Jerusalem, which it annexed in 1967, and the West Bank. Israel objects to the Palestinian campaign, saying it is an attempt to bypass negotiations.

Upon his arrival, the Pope took some time to pray in front of the separation barrier that divides Israel and Palestine. It was a poignant sight to behold, the white and prayerful figure of the successor of Peter, with his hand placed gently over the graffiti-stained wall. 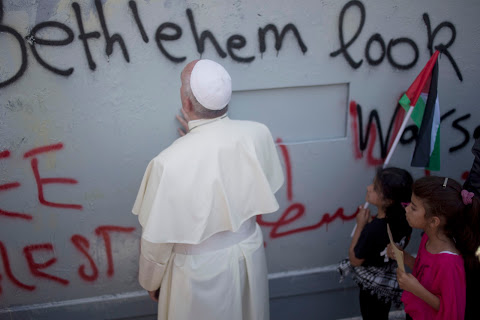 To the Palestinain authorities he stated that such an unstable climate has resulted in a “lack of mutual understanding” which in turn has yielded “insecurity, the violation of rights, isolation and the flight of entire communities, conflicts, shortages and sufferings of every sort.”

Thus the Holy Father affirmed his “closeness” to the people who have been suffering from this conflict, and impressed his “heartfelt conviction that the time has come to put an end to this situation which has become increasingly unacceptable.”

The Pontiff stated that the way towards a solution for peace and stability was the “recognition” on all parts of the “rights of every individual” and “mutual security.”

He thus invited everyone present to take courage and serve the common good in generosity and creativity, in order to “forge a peace which rests on the acknowledgment by all of the right for two states to exist and live in peace and security within internationally recognized borders.”

Francis, then taking a stronger approach, said that his “profound hope” was that all might “refrain from initiatives and actions which contradict the stated desire to reach a true agreement.”

Peace, he stressed, should be sought determinately and with “tenacity.”

It is peace that brings “countless benefits for the peoples of this region and for the world as a whole, and so it must resolutely be pursued, even if each side has to make certain sacrifices” he added.

The pontiff then called out to both the Palestinian and Israeli peoples and their leaders, to enter into the journey of true peace. “Peace in security and mutual trust will become the stable frame of reference for confronting and resolving every other problem, and thus provide an opportunity for a balanced development, one which can serve as a model for other crisis areas” he said.

Here Francis took the opportunity to refer to the Christian community, which he said “contributes significantly to the common good of society, sharing in the joys and sufferings of the whole people.”

“Christians” he continued, “desire to continue in this role as full citizens, along with their fellow citizens, whom they regard as their brothers and sisters.”