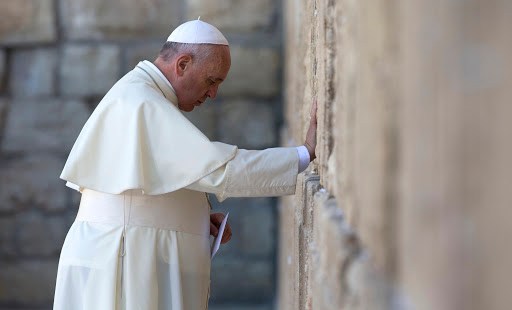 The Pope was stuck between one wall and another.

On Sunday, during his visit to the West Bank, he stopped the popemobile for an unscheduled moment of silent prayer at the concrete border barrier constructed by the Israelis. Built to exclude Palestinian terrorists from entering Israel, the wall has become a symbol of the oppression the Palestinians feel. Claiming it as a symbol of apartheid, they say it makes them prisoners in their own land.

Just a week after Palestinian and Israeli negotiations had once more broken down, Israeli Prime Minister Benjamin Netanyahu criticized the pope’s attention to the barrier and blamed the Palestinians for politicizing the Pope’s visit. Netanyahu explained that the wall was built as a security measure and invited Pope Francis to make a similar visit to another wall — this one a memorial to Jewish victims of Palestinian terrorism. The Pope agreed and so stood in silence before another wall before going on to visit second memorial to Jewish victims of oppression — the famous Yad Vashem holocaust memorial.

Two walls. Two peoples divided by animosity that extends not simply for the last fifty years since the Jews have returned to Israel, but for millennia. When we read the Old Testament, the Jewish people’s historic enemies were the Philistines — the word simply being the older version of “Palestine.” While the modern Palestinians are descended from a wide range of ancient peoples, the Philistines, like the Palestinians are the people who occupy the land of Palestine.

The battles between the Palestinians and Hebrews have continued off and on for thousands of years. Is there any way to break the cycle of recrimination, vengeance and hatred? Is there any way the ongoing feud in the Middle East can be resolved peacefully?

From a human perspective it seems impossible. However, the influence of popes on world politics is often underestimated. The peaceful power of Pope St. John Paul II helped pull down another wall in Berlin and open the Iron Curtain. Could Pope Francis be a player in an eventual peace process in the Middle East? Could Francis, with the name of the patron saint of peace makers envision a new way forward? The Pope urged the area’s leader to pursue peace: “I implore those in positions of responsibility to leave no stone unturned in the search for equitable solutions to complex problems,” he said. “The path of dialogue, reconciliation and peace must constantly be taken up anew, courageously and tirelessly.”

Pope Francis invited the Palestinian leader Mahmoud Abbas and the President of Israel, Shimon Peres to a prayer summit which will take place in the Vatican. Commenting on the situation in the Holy Land Pope Francis said, “There is a need to intensify efforts and initiatives aimed at creating the conditions for a stable peace based on justice, on the recognition of rights for every individual, and on mutual security.” Peace “must resolutely be pursued, even if each side has to make certain sacrifices.”

Can the pope make a difference? On the world stage there are very few international figures who retain credibility, stand for humane values and a higher calling. The pope seems to be respected by all and can use his influence to draw warring parties together to discuss peace. Good will and human effort provide two ways forward to peace, but there is a third factor mainstream reporters overlook, and that factor is symbolized by Francis’ visit to a third wall — the historic Wailing Wall in Jerusalem.

This ancient wall at the base of the Temple Mount, is all that is left of the great temple first constructed by King Solomon, then re-built by Herod the Great. These ancient stones were there when Jesus Christ cleansed the temple and stood on trial before Pilate on that very site. From a Catholic perspective, this was where Christ, the Prince of Peace paid the price to establish peace.

Pope Francis stood before this third wall with his two friends — a Jewish rabbi and a Muslim leader. According to custom, he inserted a scrap of paper with a prayer: the Lord’s Prayer in Spanish. The three friends showed a third way. At the third wall they showed the third power that can overcome division and strife to bring peace.