A New Council of Nicea? Pope and Patriarch to Meet in Ancient City in 2025 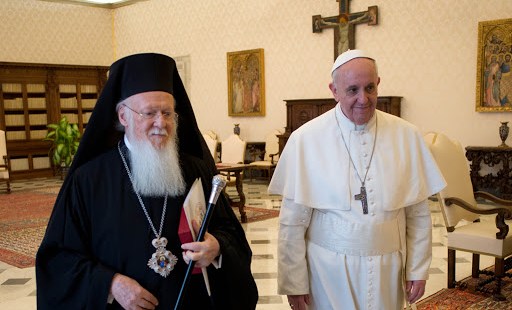 Bartholomew reveals plans for Catholic and Orthodox leaders to meet in the city that gave us the Creed.

Pope Francis was not the only one to make news when he gave a press conference on his way back from the Holy Land this week.

The man he went to Jerusalem to meet, the Ecumenical Patriarch of Constantinople, Bartholomew I, gave an interview in which he revealed plans for a Catholic-Orthodox gathering at Nicaea in the year 2025.

He said that he and Francis agreed to the meeting during their encounter in Jerusalem May 25. It’s possible that in 11 years neither man will be in the chair he now holds, but Francis and Bartholomew are intent that the meeting take place between whoever succeeds them.

Speaking exclusively with AsiaNews, Bartholomew said that he and Francis "agreed to leave as a legacy to ourselves and our successors a gathering in Nicaea in 2025, to celebrate together, after 17 centuries, the first truly ecumenical synod, where the Creed was first promulgated."

The Council of Nicaea, held not too far from Constantinople—modern-day Istanbul—brought together more than 300 bishops from East and West in the year 325. It was there that the formula of the Creed was decided, saying that Jesus "is consubstantial with the Father," to counter Arianism.

Francis and Bartholomew met in the Basilica of the Holy Sepulchre to mark 50 years since the embrace between Paul VI and Athenagoras. The 1964 meeting led to the lifting of the mutual excommunications between Catholic and Orthodox, which had led to the Great Schism of 1054. It also kicked off the modern day effort to restore communion between the two Churches.

"The dialogue for unity between Catholics and Orthodox,”  Bartholomew told AsiaNews, “will start again from Jerusalem. In this city, in the autumn, a meeting of the Catholic-Orthodox Joint Commission  will be held hosted by the Greek -Orthodox Patriarch Theophilos III. It is a long journey in which we all must be committed without hypocrisy."

The Ecumenical Patriarch continued, saying Jerusalem “is the place, the land of the dialogue between God and man, the place where the Logos of God was incarnated. Our predecessors Paul VI and Athenagoras have chosen this place to break a silence that lasted centuries between the two sister Churches."

"I walked with my brother Francis in the Holy Land not with the fears of Luke and Cleopas on their way to Emmaus (cf. Luke 24: 13-35), but inspired by a living hope which we learn from our Lord," the Patriarch said.

Francis, in his in-flight press conference on Monday, did not mention plans for either meeting, but did say that in Jerusalem, he and Bartholomew "spoke about the unity we create as we walk together."

"Unity cannot be created in a congress on theology," the Pope said. Bartholomew "confirmed that Athenagoras said to Paul VI: ‘We go ahead together, calmly, and put all the theologians together on an island where they can discuss among themselves, and we walk ahead in life!’