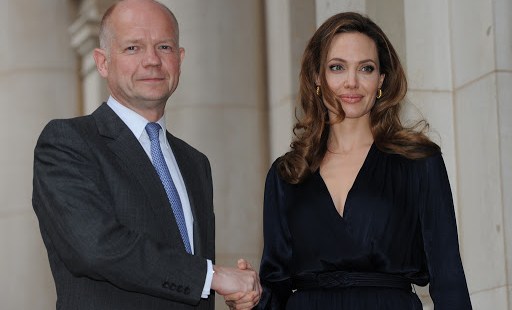 Exclusive with British Ambassador to the Holy See.

On Tuesday 3 June, at 12.00 noon (Rome time), Vatican Radio, in cooperation with the British Embassy to the Holy See, is hosting a live panel discussion: “End Sexual Violence in Conflict: #TimeToAct.”

The discussion, (which you can watch here below), is held in conjunction with the Global Summit to End Sexual Violence in Conflict taking place in London on 10-12 June 2014, co-chaired by UNHCR Special Envoy Angelina Jolie and British Foreign Secretary William Hague. It will be the largest international gathering ever held on this matter.

Aleteia speaks to Nigel Baker, British Ambassador to the Holy See, who is launching the webcast and participating on the panel.

1. What is the significance of the Vatican and the British Embassy to the Holy See holding a discussion on this issue in the run-up to the Summit?

We felt it important that we should be involved in this event from here in Rome, as an embassy to the Vatican, particularly because of the huge role that faith networks and in particular the Catholic network can play in joining the governments and civil society in facing up to this problem. Fundamentally we have a very ambitious goal, which is to bring an end to sexual violence in conflict.

And there is both the power of the moral leadership that the global Catholic Church can play in making clear that this is something that has to end, right down to the Catholic missionaries, nuns and lay people working with the victims on the ground in conflict zones – sometimes being witnesses, and sometimes even being victims themselves – who truly have a deep understanding of what this terrible crime is all about. So bringing that all together, in the overall effort to bring an end to sexual violence in conflict, is – I think – an essential part of the mix.

We’ve got some of the most authoritative voices across the Catholic network to speak about this issue. From Catholic organisations we have Michel Roy, Secretary General at Caritas Internationalis; we also have Pádraic MacOireachtaigh, Regional Advocacy officer for Jesuit Refugee Service Great Lakes Region, who will be web-connected from Burundi; we have two missionary sisters, Sr. Elena Balani, a Comboni Missionary Sister who has done a lot of work in Makala, South Sudan, and Sr Victoria Chiharhula, from the MSOLA (Congo).

Together they will provide a very authentic and powerful witness of what is happening. And will give ideas of a way forward, as well as challenging government representatives like myself, as to what they hope to see from the conference next week.


3. What is the specific aim of the Summit next week?

The aim of the summit is to identify specific actions of the international community that can turn the political will that we already have into practical action.

So ways which we can improve accountability at the national and international level, that will enable us to ensure that the impunity of the perpetrators of rape and violence can’t happen (although it’s a massive crime, hardly any perpetrators are ever brought to justice). And to find ways in which the international community can construct better practices for protection and to make sure that this crime doesn’t fall through the gaps.


4. What about the particular role that the Catholic Church can play in helping end sexual violence in conflict?

One of the sessions at the conference will aim particularly to bring faith communities and religious leaders together to talk about their particular role in tackling sexual violence in conflict.

I think we can look into a whole array of areas, of how faith leaders, and particularly Catholic networks, can help against the stigmatization of survivors, which is one of the greatest problems in these crimes, that the survivors often feel guilty after having been victims; Can help communities through being very powerful witnesses to the crimes committed, to end the impunities; Can deal with some of the root causes, e.g. the way that women are often treated in society; Can provide support to Catholic networks as first responders; And how they can help governments to collaborate more closely with Catholic networks on the ground. Very often the victims won’t want to go to government agencies to look for help and support afterwards, but they will often want to go to the missionaries they know, the medical clinics run by religious for example;

So there is a huge amount that Catholic networks can do, also under the great overall umbrella of raising awareness that this crime exists, and that it is not being tackled properly, particularly in light of the Catholic focus on human dignity, which is central to Pope Francis’ message. And this is a crime committed deeply against human dignity.