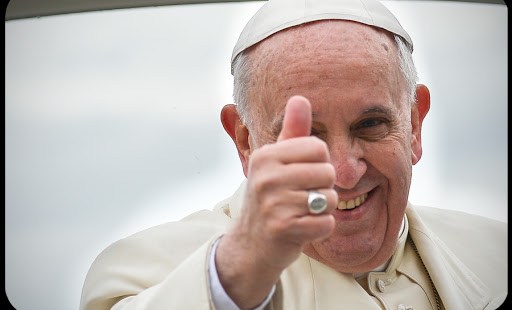 Papal response is affirmation to those on margins, say Jesuits.

The Pope has once again reached out in a personal way to people living on the margins. According to National Jesuit News the Holy Father wrote a letter to a group of young detainees in the United States.

According to the Jesuit news outlet, Father Michael Kennedy, executive director of the Jesuit Restorative Justice Initiative, arranged for young Jesuit novices to wash the feet of detainees at a Los Angeles juvenile detention center on Holy Thursday.

Father Kennedy was following the lead of Pope Francis, who also washed the feet of young detainees in Rome.

The youth at the Los Angeles center wrote a letter to the Pontiff, and to their great surprise and joy, they received a reply from Francis himself.

Here’s what it read:

I was very moved to read the letters you sent to me from the young people of Juvenile Hall and to know that we were close to one another in spirit during the washing of the feet on Holy Thursday evening.

Please tell the young people that I am remembering them in my prayers to our Lord Jesus, who loves each of them with all his heart. I ask them to pray for me and for the needs of all God’s people throughout the world.

With gratitude and affection I send my blessing.


In a reflection on
The Tidings website, Fr. Kennedy wrote that when he read the Holy Father’s letter, he “thought of what Dorothy Day said when working at the margins: ‘to work with the poor is a harsh and dreadful love.’ Most of the time it feels like you are losing. Being at the margins brings its own isolation.’”

The Jesuit said that Pope Francis’ letter to these young detainees “affirmed that the choice to kneel down with a population that society has neglected is where we find God’s presence. With his gesture, he points to where we should serve. Rather than running away from those who are not healthy, we should run toward those who need healing.”


Fr. Kennedy described the Pontiff’s actions as a “small sign of affirmation from the man at the head of our Church.” And even though the daily life of these young people on the margins might not be dramatically changed in a practical way, it nevertheless “embodies the Gospel’s message of forgiveness and healing, and it affirms that this is where God truly is.”

The reaction of the young detainees and Jesuit novices was of joy and incredulity. “This isn’t real?!” was the initial response of one of the novices, Jonni Alcantara. “I probably showed this letter off to every Catholic I know!” he exclaimed merrily.