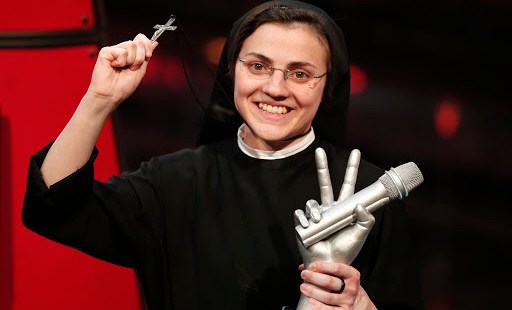 © MARCO BERTORELLO / AFP
ITALY, Milan : Sister Cristina Scuccia reacts after winning the Italian State RAI TV program's final "The Voice of Italy" in Milan on June 6, 2014. The 25-year-old nun Cristina won the talent show thanks to her habit-clad performances but also by having on her side the critics, who say her popularity stems from novelty value. AFP PHOTO/Marco BERTORELLO
Share
Print
Carly Andrews - published on 06/06/14

And she gets everyone praying the Our Father after she takes the prize!

On Thursday evening in Italy it was the final of The Voice, an Italian singing competition in which aspiring artists battle it out for the ultimate prize: a contract with a top music label.

To everyone’s surprise this time round a young nun joined the competition. She made her way to the final, facing an extraordinary amount of media attention, where she took on three other opponents Giorgia Pino, Thomas Pini and James Flights, and gave her best go at ‘What a feeling’ and ‘No One’ by Alicia Keys.


In the last round, Sister Christina stole 62% of the votes, knocking backcombed rocker Giacomo Voli out of the running.

As the results were called, amidst tumultuous applause she cried from the stage “and now lets all say the Our Father together!” At that crowning moment, she reminded the world watching who she was: a nun and a daughter of Christ.

She invited everyone to hold hands and pray with her. “I want Jesus to enter here among us” she said, and before anyone could respond, she began, voice shaking with emotion. In a somewhat momentarily subdued – and perhaps a little awkward – studio, she said the prayer that Jesus taught us and then thanked the crowd and all those who had helped her “during this difficult time”, after which J-Ax (the judge who was teamed with the young nun) jokingly warned that him and Pelù, one of the other judges, would “catch fire.”

However after the applause died down and her voice could be fully heard, she expressed her ultimate thanks to God: “My final and most important thanks go to the one who is up there,”

Pelù, widely known for his anti-clerical stance, who some years ago wrote a song called "El Diablo" (The Devil), said that the young sister “had been so brave in these months at managing the stress of everything that was being said about her.”

J-Ax, also known for his anarchical ways and who Sister Cristina chose herself to be partnered with during the competition, was perhaps one of the most affected by her involvement in the show. During the audition this young nun with her joyful presence moved him to tears, and almost every time she sang afterwards, his gaze seemed to be one of complete emotion and even tenderness.

“The media hype has destroyed me” he said afterwards, “and I can’t even imagine what it has been like for a 25 year old sister.”  The two sang together during the final, and after she won he embraced her with brotherly affection.


“I am definitely not used to these rhythms” commented Sr. Cristina after the event, “and so now I will go back to my priorities: prayer, getting up early in the morning, and my service in school.”

She was accompanied by her Mother Superior Agata, who hasn’t left her side since the competition began.

The young nun did, however, comment on the possible content of her future music. “My songs will speak about love, real situations and will be in a language that is accessible to everyone” she said.

When asked if she would go on tour, she replied simply “this is part of the future, so it is in the hands of Providence. Evanglezation doesn’t detract from this here, so we will also go into the streets to proclaim God.”

She had also commented as to the finincial side of things in an interview with Vanity Fair 6: “the economic aspect doesn’t interest me, my only objective is to come here and say ‘I have found Jesus,’ I didn’t expect any more than this."

Raffaele Giacopuzzi, director of the ‘Good News Festival’ – a National Catholic singing competition in Italy, which Sr. Cristina won before participating in The Voice – spoke to Aleteia about this consecrated singing sensation.

“Many have been wondering what sense there is to Sister Cristina singing songs that have nothing to do explicitly with the message of the Gospel," he said. "But very few people have realized that evangelization comes firstly from who we are and what we do, and only then can we be credible in what we say.”

“I don’t know if the phenomenon-Sister Cristina will open new doors in Italy to the music of Christian inspiration," he continued, "we can only hope."

"But one thing I do know: through her witness many people have received an important input to the fact that the first major obstacle between the Gospel and the world is distance from God, which today often comes in the form of ostentatious pride. And so, little-big signs of closeness always contribute to the beautiful proclamation that God is not far away. He is God with us.”