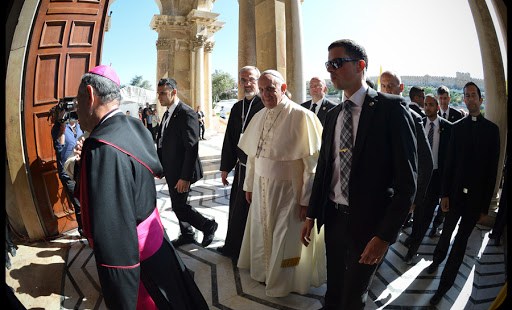 Will the Pontiff’s attempts for peace pay off?

When Pope Francis invited the presidents of Palestine and Israel to come to his home and pray, he said, “Building peace is difficult, but living without peace is a constant torment.”

It was just two weeks ago, while speaking in Bethlehem’s Manger Square, that the Pope invited the two leaders to pray with him. “In this, the birthplace of the Prince of Peace I wish to invite you, President Mahmoud Abbas, together with President Shimon Peres, to join me in heartfelt prayer to God for the gift of peace. I offer my home in the Vatican as a place for this encounter of prayer.”

Here are six things that you need to know about this historic event:

The meeting, which has now been called officially by the Holy See as a meeting of “invocation for peace,” is taking place inside Vatican City on this Pentecost Sunday.

Director of the Holy See’s press office Father Federico Lombardi said in a statement on Friday that Peres will arrive first, at 6:15pm, followed by  Abbas 15 minutes later. After welcoming each one privately in his home at Casa Santa Marta, the Pope, together with the two presidents and Ecumenical Patriarch Bartholomew I, will precede to a special triangular patio in the Vatican gardens, with a view of St. Peter’s Cupola.

The Pope will then seat himself between the two presidents with the Patriarch – who arrived in Rome on the Vigil of Pentecost – sitting nearby, and the time of invocation for peace will begin.

“There will be a musical opening,” stated Lombardi, “then there will be three moments which will unfold in the chronological order of the three religions, first Judaism, then Christianity, then Islam.”

“There will first be a moment of thanksgiving for creation,” he continued, “then a moment asking for forgiveness, then the invocation for peace.”

Afterwards Pope Francis and the two presidents will each take a turn in their own way, to invoke peace for the Holy Land.

“Then there will be a gesture of peace,” said Lombardi, “probably in the form of a handshake, and they will plant an olive tree… and each of the four protagonists will put earth over this tree, as a symbol of peace.”

After this, the four will meet privately to spend some time freely among themselves. This will conclude the meeting.

The Holy Father’s invitation has come at a particularly poignant time, when negotiations between Israel and Palestine are at a standstill.

Last April, Israel suspended peace negotiations with Palestine after a reconciliation deal was signed between the two main Palestinian factions Fatah and Hamas.

Israel rejected any form of collaboration with Hamas, which is widely recognized as a terrorist group.  “I call on all responsible elements in the international community not to run to recognize the Palestinian government of which Hamas is a part and which rests on Hamas,” stated Israel’s Prime Minister Benyamin Netanyahu.  “Hamas is a terrorist organization that calls for the destruction of Israel and the international community must not embrace it.”

However, a Fatah spokesman said that despite Israeli “blackmail and threats,” they were proceeding with their “efforts to solidify the unity of our homeland and people.”

Indeed, on June 2, Palestine’s new unity government was sworn in, to which Netanyahu angrily responded: “Today, Abu Mazen [Mahmoud Abbas] said ‘yes’ to terrorism and ‘no’ to peace."

Despite US attempts at pushing forward negotiations, the new unity government is a major obstacle in fostering dialogue between the two.