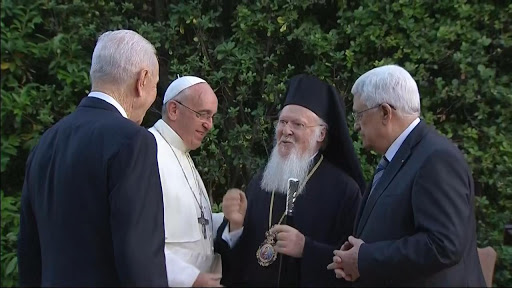 VATICAN CITY (AP) — Pope Francis plunged head-first into Mideast peace-making Sunday, welcoming the Israeli and Palestinian presidents to the Vatican for a remarkable evening of peace prayers just weeks after the last round of U.S.-sponsored negotiations collapsed.

Israeli President Shimon Peres and Palestinian President Mahmoud Abbas joked and embraced in the foyer of the Vatican hotel where Francis lives and later in the Vatican gardens, where they joined Francis in presiding over a sunset invocation of Jewish, Christian and Muslim prayers.

Francis told the two men, who signed the Oslo peace accords in 1993, that he hoped the summit would mark "a new journey" toward peace. He said too many children had been killed by war and violence, and that their memory should instill the strength and patience to work for dialogue and coexistence.

"Peacemaking calls for courage, much more so than warfare," he said. "It calls for the courage to say yes to encounter and no to conflict."

The event had the air of an outdoor summer wedding, complete with receiving line and guests mingling on the lawn as a string ensemble played. Only the two key protagonists are technically on opposite sides of the intractable Israeli-Palestinian conflict.

Vatican officials have insisted that Francis had no political agenda in inviting the two leaders to pray at his home other than to rekindle a desire for peace. But the meeting could have greater symbolic significance, given that Francis was able to bring them together at all so soon after peace talks failed and at a time that the Israeli government is trying to isolate Abbas.

"In the Middle East, symbolic gestures and incremental steps are important," noted Father Thomas Reese, a veteran Vatican analyst for the National Catholic Reporter. "And who knows what conversations can occur behind closed doors in the Vatican."

The meeting has also cemented Francis’ reputation as a leader unhindered by diplomatic and theological protocol who is willing to go out on a limb for the sake of peace. Francis capitalized on both his own enormous popularity and the peace-loving heritage of his namesake, St. Francis of Assisi, to bring the two sides together.

The unusual prayer summit was a feat of diplomatic and religious protocol, organized in the two weeks since Francis issued the surprise invitation to Peres and Abbas from Manger Square in Bethlehem.

It took place in the lush Vatican gardens in the shadow of St. Peter’s Basilica, the most religiously neutral place in the tiny city-state. It incorporated Jewish, Christian and Muslim prayers, delivered in Hebrew, English, Arabic and Italian and with musical interludes from the three faith traditions.

The prayers focused on three themes common to each of the religions: thanking God for creation, seeking forgiveness for past wrongdoing and praying to God to bring peace to the region.

At the conclusion, Francis, Peres and Abbas shook hands and planted an olive tree together in a sign of peace. Also on hand was the spiritual leader of the world’s Orthodox Christians, to give a united Christian front.

Vatican officials have described the prayer evening as something of a "time-out" in political negotiations, merely designed to rekindle the desire for peace through prayers common to all the main faith traditions in the Holy Land.

But even Francis’ secretary of state, Cardinal Pietro Parolin, has said the power of prayer shouldn’t be discounted for its ability to change reality.

"Prayer has a political strength that we maybe don’t even realize and should be exploited to the full," he said at the end of Francis’ recent Mideast trip. "Prayer has the ability to transform hearts and thus to transform history."