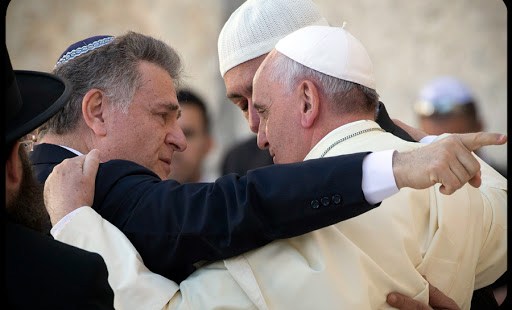 By hosting Muslim prayers in the Vatican, the pope is bound to garner some disrespect.

Some Catholics like to slam St. John Paul II for an incident in which he showed respect to the Islamic religion by kissing the Koran. By hosting Muslim prayers in the Vatican, is Pope Francis headed for the same fate?

Every pope will have his critics — and no doubt some Catholics will start branding Pope Francis as a Muslim loving, Koran kissing pontiff — but the prayers for peace with Palestinian President Mahmoud Abbas and Israeli President Shimon Peres on Pentecost Sunday should not put him in that category.

A headline was screaming across the Internet about the meeting of the Pope with Abbas and Peres: “For the first time Muslim prayers are held in the Vatican!” The headline made the meeting for prayer sound like the Pope was about to embrace Islam, become an Imam, and turn St. Peter’s into a mosque.

Abbas and Peres met Pope Francis at the Casa Santa Martha and then drove together to the Vatican Gardens where the service took place. Leaders of the three religions held prayers in chronological order: first a Jewish rabbi, then the Christians, then a Muslim imam led a service. After the prayers, reading and music the leaders planted an olive tree for peace, and met privately before departing.

For those who are nervous about “Muslim prayers in the Vatican” it should be pointed out that the prayer service is not taking place in a Catholic Church and it is a personal initiative of Pope Francis. This was not a large, public, global interfaith act of worship.

The meeting for prayer between Pope Francis, Mahmoud Abbas, and Shimon Peres is a good opportunity to be reminded of the relationship between Catholicism and other religions. The simple explanation is that Catholics recognize goodness, truth, and beauty wherever they exist. We therefore acknowledge all that is beautiful, good, and true in all world religions.

However we do make distinctions. Because we believe the Catholic faith is the fullest understanding of man’s relationship to God, we see the other religions in a hierarchical relationship to the Catholic faith. Closest to us are the Eastern Orthodox and then other Christians who are baptized and have faith in Christ. Religions that have branched out and away from Christianity to become sects or cults may still worship God and follow Jesus Christ albeit in a gravely defective way.

Among the non Christian religions we recognize Islam and Judaism as having a special place. Judaism because it is the foundation and root of the Christian faith and Islam because it is another faith in the tradition of father Abraham.

Catholics also recognize and affirm the goodness, truth, and beauty in other world religions, while also recognizing what we see as defects and partial understandings of the fullness of God’s revelation in Christ Jesus. We recognize in the followers of other religions sincere searching for God.

This is why the Catechism of the Catholic Church insists that while we recognize and affirm what is good in other religions we also remember the missionary mandate — that Catholics are to engage with believers in other religions in a positive way, but also with the intent of sharing the abundant life that Jesus Christ has to offer, leading eventually to their baptism and faith in Christ.

Pope Francis’s invitation to pray with Mahmoud Abbas and Shimon Peres shows the openness that all Catholics should show to those of other religions. To affirm and accept others is not the same thing as condoning everything they do or validating everything they believe. Instead it shows the open attitude that Christ the Lord, remembering that he came not to condemn the world, but to seek and to save that which was lost.