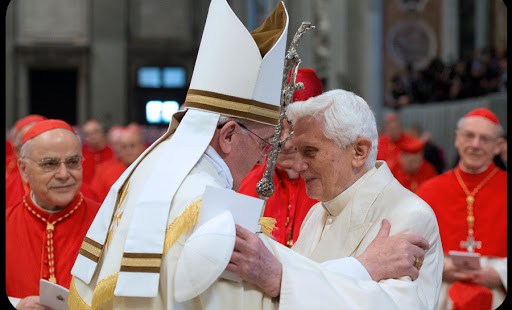 Second interview where he mentions possibility of following in Pope Emeritus Benedict’s footsteps.

For the second time in as many weeks, Pope Francis has mentioned retirement.

On his flight back to Rome from his Holy Land pilgrimage at the end of May, the Pope told reporters he would be open to eventually retiring.

"I will do what the Lord tells me to do," he said in an in-flight press conference.

He was responding to a question about what he’d do if his health did not permit him to continue serving as Pope.

"I think that Benedict XVI is not a unique case,” he said of his predecessor, who stunned the world by stepping down last year. “I think we should see him as an institution who opened a door, the door of emeritus popes," the Pontiff said. "Will there be more (papal resignations)? God knows, but the door is open," he said.

Now, in an interview with a Spanish newspaper, Francis has reiterated that retirement is a possibility. In light of reported health problems the 77-year-old bishop of Rome has been experiencing, the repetition may be preparing the Catholic world for another papal transition.

“Pope Benedict has made a very significant act,” he told LaVanguardia.com, an interview which can be read in English at Catholic News Agency. “He has opened the door, has created an institution, that of the of the eventual popes emeritus. Seventy years ago, there were no emeritus bishops. Today how many are there? Well, as we live longer, we arrive to an age where we cannot go on with things. I will do the same as him, asking the Lord to enlighten me when the time comes and that he tell me what I have to do, and and he will tell me for sure.”

The interviewer mentioned that Francis has “a room reserved in a retirement home in Buenos Aires,” where the Pope was archbishop from 1997 to 2013.

“Yes, its a retirement house for elderly priests,” he responded. “I was leaving the archdiocese at the end of last year and and had already submitted my resignation to Benedict XVI when I turned 75. I chose a room and said ‘I want to come to live here.’ I will work as a priest, helping the parishes. This is what was going to be my future before being Pope."

The latest papal interview also revealed that almost all Vatican officials initially opposed Pope Francis’ idea of bringing the Israeli and Palestinian presidents together for a prayer summit. They eventually came around to the idea.

"Here in the Vatican, 99 percent said we shouldn’t do it, and then later the 1 percent started growing," the Pope said.

Speaking to La Vanguardia, Francis also defend Pope Pius XII, accused by some of not speaking out enough against the Holocaust. He noted that Pius sheltered Jews and said even the Allied powers had some explaining to do.

"They knew perfectly well the Nazis’ rail network used to bring Jews to concentration camps. They had the photos. Why didn’t they bomb the tracks?" he asked. "It’d be good that we discuss everything" and not just Pius’ actions.