War is Never an Excuse for Crime, Prelate Says at Sexual Violence Summit 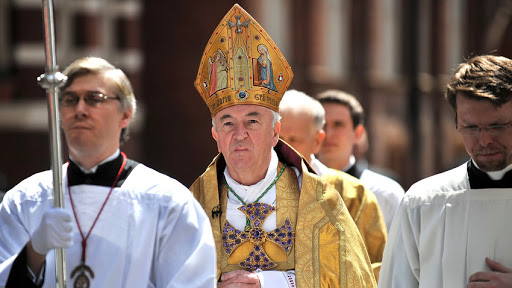 (Vatican Radio)  A proposed international protocol aimed at ending impunity for sexual violence in conflict was unveiled at a global summit on the issue in London.

The 4-day meeting was being co-hosted by British Foreign Secretary William Hague and U.N. Special envoy Angelina Jolie who called for governments around the world to publicly support the changes outlined in the protocol.

Cardinal Vincent Nichols, Archbishop of Westminster, was among the various Church and faith representatives who addressed the summit. In his speech, the cardinal deplored the frequent de facto cultural acceptance of sexual violence in many situations and stressed that war is never an excuse for such crimes.

Asked why a conference of this type of is needed, Cardinal Nichols said there is a real need to end the climate of impunity for such “awful crimes.”  He described the prevalence of sexual violence in wars and conflicts as “indescribably terrifying,” especially because this crime “is often done to order” and amounts to the “systematic brutalisation” of people.  “It’s a direct attack on the very essence of a human being,” he said.

Cardinal Nichols said one key obstacle to overcome is to alter the way in which blame is often apportioned by society in the case of sexual violence. He said we need to end the “misplaced sense of shame” surrounding these crimes, “in which the victims of sexual violence are made to bear the shame, whereas it should be the perpetrators.”

When it comes to the moral principles involved, Cardinal Nichols stressed that “conflict is never an excuse for illegality … and "war does not justify this crime.”   Although there are many obstacles still to overcome in ending the practice and impunity for sexual violence in conflict, the cardinal said he takes heart from the great “resolve” he has seen around the London summit.

In his address to the conference, Cardinal Nichols condemned the “deliberate and ordered  tactic of oppression, domination and destruction" which he said is “at the noxious heart” of sexual violence.  He stressed that sexual violence is always “a crime” and that war and conflict does not give anybody an excuse to carry out such acts. Cardinal Nichols also lamented that the “de facto cultural acceptance” of sexual violence in many places and in so many circumstances contributes significantly to the degradation of women in particular.

Here is the full text of the address by Cardinal Nichols to the conference, delivered June 12:

“I am privileged to have this opportunity to speak at this most important Initiative and to be invited to do so from the perspective of my Catholic faith. In doing so, I offer my fullest congratulations to the Foreign Secretary in particular, for his dedication to this crucial cause.

The unbelievable surge of sexual violence against both women and men in parts of our world is manifested in the shocking facts well documented in this Conference. I doubt though whether even the most graphic accounts of this evil are capable of conveying the sheer horrors which are generated by sexual violence in conflict and warfare. The damage which is done to the human dignity of the large numbers of victims of sexual violence is so radical and so permanent that it defies description.

It is not the random act of men who have, for a while, lost all sense of decency, which defies description but the deliberate and ordered tactic of oppression, domination and destruction which is at the noxious heart of sexual violence. It is to the shame of our world that the systematic use of sexual violation is still today, in some places, considered as a duty of soldiers, an order that they must carry out. This horror is further compounded by the fact that the stigma attached to sexual violation often falls on the victim and not on the perpetrator. What terrible collusion is indicated by that fact! The public tolerance of sexual violence leads to the inversion of human decency; it reinforces other forms of oppression and undermines the morals which uphold the rights of the human person.