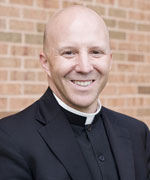 Last week, Melinda Gates, the wife of Bill Gates, made headlines when she said that the foundation she and her husband run will not fund abortion.

Father Boquet heads HLI, an international pro-life organization with affiliates and associates in over 80 countries.

He spoke today with Aleteia  about Gates’ claim.

What’s your response to Melinda Gates statement that the Gates Foundation will not fund abortion?

We know that the Gates Foundation doesn’t openly fund abortion. We already know that. But they give tens of millions of dollars annually to some of the biggest abortion companies and promoters in the world.

So to come out with what she just recently said, in my opinion, is disingenuous because if she and the organization of this foundation are sincerely separating themselves from the abortion industry, one of the things we would clearly see is someone like [Planned Parenthood Federation of America President] Cecile Richards immediately coming out to contest this decision and bemoan the fact that the Gates Foundation is no longer recognizing “the needs of women and their reproductive health rights.” That did not happen. No one else came out on the other side of the aisle to contest anything.

So basically it’s a confirmation that the Gates Foundation did not change its narrative…. It supports the industry by giving money to Marie Stopes International and International Planned Parenthood Federation and other groups, in the millions, to promote their work, which is population control, i.e., abortion, abortifacients and contraception.

So we’re very disappointed that her statement has not made any radical change in the decision of the Gates Foundation.

What can you tell us about their promotion of contraception?
When you consider the contraceptive issue, of course, one of the main contraceptives, if you will, that they promote is Depo-Provera. If we look at what Depo-Provera does, if we look at what the United States Food and Drug Administration has actually said about this we know that it lowers the ability to protect against HIV and the transmission of these diseases with women. This is just one example of how the care about women and the violence against women, to use their language, is not sincere on their part. This is a very dangerous drug to women’s health, and many of these women are not told the whole truth about this type of injection, and the consequences of being injected with this and the long-term ill effects of it.
Many women are being affected by this mentality in many underdeveloped nations, like Africa.

We’re very concerned. When you look at the program the Gates Foundation is pushing for family planning: by 2020 they want to have 120 million women to start using long-term birth control. This is one of the goals, and of course they’re aiming mostly at these underdeveloped nations, particularly Africa, where the Gates Foundation is very active and Marie Stopes International is very active and International Planned Parenthood Federation is active. They’re aiming at certain parts of the world to promote their cause. The goal is to “help poor women space their pregnancies,” but they won’t tell the whole story and the consequences of that mentality.

Are they open to promoting natural family planning?

I know a few people personally who have written the Gates Foundation and Ms. Gates herself to provide information on NFP and to promote NFP in the programs the Gates Foundation is supporting and never have received any feedback or any comments or any recognition of any of the materials sent. And these are very reputable people working in pro-family, pro-life organizations. So I would say it’s definitely not something that’s on the agenda in the promotion within the Gates Foundation or those they’re working with.

They are working primarily with two of the largest abortion providers in the world, Marie Stopes International being the largest, so their agenda would have nothing to do with natural family planning or the method that the Church would recognize.