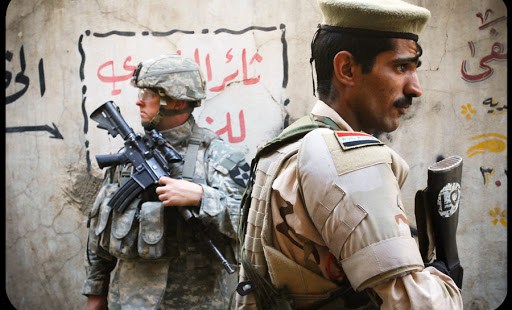 We couldn’t do it then, and we can’t do it now.

I said so at the time, and I wish to say so again. Leave aside the vanishing “weapons of mass destruction” that provided the pretext for war. The reason we waged that war was simple and strategic: We saw in Iraq an unpredictable enemy whom we could not control, and we wished to replace its government with a friend whom we could. Nor were we satisfied with replacing one secular Arab tyrant with another — a project that might have succeeded. No, the neoconservatives who provided the brains of the Bush administration considered such “realist” goals petty and uninspiring.

These thinkers dreamed big: They called on Americans to transform the entire Middle East in our own self-image, to change the course of a 1300-year-old political culture in the Muslim world, seeding it with one tolerant democracy after another, until we had removed every grievance that produced religious extremism and terrorism, so there would never again be another attack like the one on September 11, 2001. One might as well respond to the next mass shooting by a maniac in America by dumping Prozac into the water supply, and confiscating every gun in the country.

The U.S. never had a rational, workable plan for creating a multi-religious democracy in Iraq for one simple reason: The project was impossible. Every rational observer knew it, and the honest ones admitted it. Iraq was an artificial country from the moment of its creation from ill-fitting shards of the Ottoman empire, with none of the cultural habits or political institutions required to guarantee religious and personal freedom to religious or cultural minorities. Only someone utterly ignorant of Iraqi culture would have imagined that U.S. troops could iron out the ancient hatreds that divide Shi’ite from Sunni, Christian from Muslim, Arab from Kurd.

We couldn’t do it then, and we can’t do it now.

We have nothing to gain as a country by trying to mediate the current civil war between Iraq’s Shi’ites and Sunnis. It is part of a regional civil war between those two equally intolerant forms of Islam that has been raging for more than 1,000 years — which currently breaks down into Iran and its allies in Syria and Iraq, and Sunni powers like Saudi Arabia, Turkey and Egypt. Neither side has the moral high ground, and neither one is the natural ally of the U.S. or local Christians. We cannot stop the bloodshed by intervening, nor is it clear which side which should take: That of the Iranian dictatorship, or that of al Qaeda-inspired Sunni extremists, who are funded by money that pours into Saudi Arabia from our gas pumps. The situation is hopelessly complicated, and the U.S. lacks both the know-how and the wisdom to sort it out.

We cannot impose “justice” in the region, because neither side is willing to treat its enemies justly, or accept an outside compromise imposed by faraway infidels. Nor are we willing to spend the tens of thousands of American lives that would be required to impose such a solution. Nor would it be worthwhile if we could. The only thing Sunni and Shi’ite will agree on is that they resent the Americans, for claiming that we knew how to fix things then barging in and failing. And they will take out their anger on the nearest local target, namely the luckless Christians who survived our last intervention — or the next Americans they kill in a terrorist strike.

If we had listened to the would-be global micromanagers among us we would have intervened last year in Syria — to install in power the same Sunni extremists who are now marching on Baghdad, whom the neocons now wish us to fight. If we intervene now to stop them, the Shi’ites whom we assist will thank us by pouring more money into terrorist attacks on Israel, or attempted revolutions in places like Bahrain or Saudi Arabia.

We literally cannot win, which means that we should not fight — or even take sides in this fight. We have no more stake in which intolerant Muslim faction prevails in Iraq than we do in the intra-party struggles in Communist China. Any war which we launched to meddle in the Middle East would fail at least one criterion for a just war: It would have no solid prospect of success. It would be as futile as Guy Fawkes’ bombing of Parliament, or a vigilante attack on an abortion clinic.

Because it would be unjust, it would be sinful. And so Christians should oppose it — on principle.

John Zmirak is co-author of the upcoming book, The Race to Save Our Century.