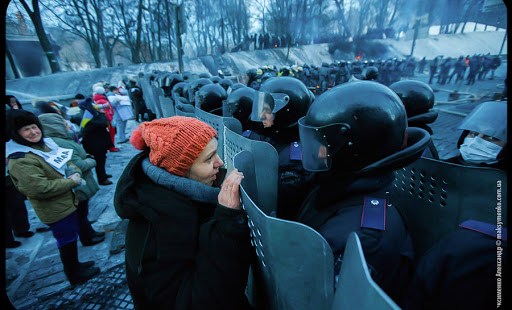 Catholic university takes lead in bringing healing to a country that is still going through turmoil.

Eastern Ukraine is still in turmoil, with separatist groups clamoring for independence or greater union with neighboring Russia—and with Russian tanks reportedly crossing into Ukrainian territory.

But in the west of Ukraine, many are reaping the fruits of what has been called the “Revolution of Dignity,” the EuroMaidan protests on Kiev’s Independence Square and the election of a new president.

The Ukrainian Catholic University lost one of its teachers during the months-long protest: Bodhan Solchanyk was killed by government snipers, along with scores of others.

But the university itself, based in the western city of Lviv, has attempted to provide healing for the country with a number of initiatives.

Volodymyr Turchynovskyj, director of the university’s Institute for Ethics and Contemporary Issues, spoke with Aleteia about two such projects: one to foster greater understanding between young people from opposite ends of the country, the other to inject values and decency into public service, which all too often has been plagued by corruption.

Tell me about the young people who visited UCU from the East while all the protests were going on in Kiev.

What we’ve really observed for the last few years is that there is great potential among the younger generation to get united. These are people who do not have all the background from the past. Practically speaking they were born in a new country. They don’t have that fear connected with the Soviet past. They are much more open and much more willing to get engaged and cooperate with other young Ukrainians here. I think they are willing to take responsibility for their country. They were born in this country, and when they think of themselves, very often they see themselves as part of this country, as part of this society. They might not like the way things are developing—for example, the economy—but it would never occur to them what would happen if the Soviet Union were to come back or if Russia takes over this country. That past is already in the textbooks for them, basically.

The moment [former Ukrainian Presidnt Viktor] Yanukovich escaped the country and went to Russia, it was clear to us that we’d have to make some kind of extra effort in terms of uniting the country, and there was an initiative to bring young people from the East to Lviv, basically to see the city and the people and the way we live here…. We invited young people—most of them were students—for the weekend, and that was done in cooperation with the mayor of Lviv.

Eventually we’d have some 200 young people coming to Lviv for two or three days. We’ve had students from Donetsk, Kharkiv, Zaporizhia, virtually all the major cities in eastern Ukraine. There were almost 600 applicants from Kharkiv, and we had to select only 200.

For most of them it would be the first time they were in Lviv, so we’d give them a city tour, and the mayor would meet with them. And then we’d show them UCU, organize meetings here with people like [ Soviet-era dissident] Myroslav Marynovych, have a lecture and discussion.

In some cases the parents were more afraid than the students themselves…especially given the massive propaganda campaign that was launched by Russian media during the last month, that Lviv is almost the seat of terrorism and terrorists are all over the city and all over Western Ukraine and that they’ve actually changed the government here.

But this initiative was not something new to us because after the [2004] Orange Revolution, our immediate response was to organize a Christmas Together project. Hundreds of students came from Eastern Ukraine to experience Christmas here, for two years in a row.