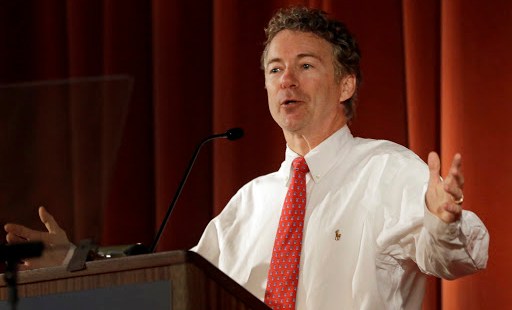 WASHINGTON (AP) — Describing a nation "in a full-blown spiritual crisis," Kentucky Sen. Rand Paul on Friday vowed to fight against abortion for the rest of his political career, joining a parade of ambitious Republicans courting religious conservatives as the early jockeying for the next presidential contest intensifies.

"What America needs is a revival," Paul declared while addressing the Faith and Freedom Coalition.

Paul, a libertarian favorite who often downplays the Republican Party’s focus on social issues, plunged into an aggressive defense of "unborn children."

"I believe that no nation, no civilization, can long endure that doesn’t respect life from those that are not yet born to life’s last breath," he said. "I will stand up for unborn children as long as I’m privileged to be in office."

This week’s conference highlights the balancing act leading Republicans face as they work to bridge internal divisions and improve the Republican Party’s image. While religious conservatives continue to wield influence in the GOP, just last year the Republican National Committee released an exhaustive report calling on Republicans to adopt an "inclusive and welcoming" tone on divisive social issues.

But like Paul, Santorum aggressively endorsed conservative social priorities. The former Pennsylvania senator said that Republicans aren’t fighting hard enough to protect "the most basic institution that holds the family together — that’s the institution of marriage."

Organizers said more than 1,000 evangelical leaders were attending the conference, designed to mobilize religious conservative voters ahead of the upcoming midterm elections and the 2016 presidential contest. While polls suggest that social conservatives are losing their fight against gay marriage, Republican officials across the political spectrum concede that evangelical Christian voters continue to play a critical role in Republican politics.

"You can ignore them, but you do so at your own peril," said Republican operative Hogan Gidley, who has worked for Santorum and Mike Huckabee during his 2008 run for the presidential nomination.

In the 2012 general election, exit polls showed that white evangelical and born-again Christians made up 26 percent of voters. The group has far more power in lower-turnout Republican primary elections.

On Thursday, GOP Sens. Marco Rubio of Florida and Ted Cruz of Texas insisted that America’s leaders must do more to defend Christian values at home and abroad, blaming President Barack Obama for attacks on religious freedom as they addressed the conference led by long-time Christian activist Ralph Reed.

"Those of us inspired by Judeo-Christian values … have an obligation to our country and to our fellow man to use our positions of influence to highlight those values," Rubio said.

He charged that Obama’s policies "completely ignore the importance of families and values on our society, thinking that instead those things can be replaced by laws and government programs."