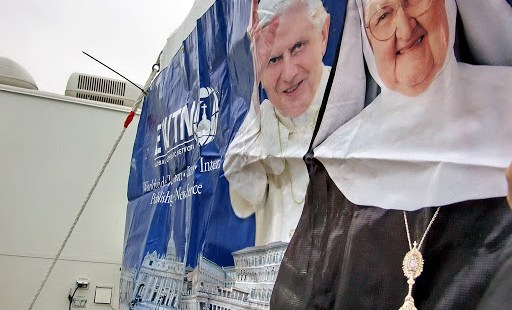 News you may have missed this week.

Iraq continues to dominate the news this week, with the Islamic State of Iraq and Syria making more gains in that country, driving Christians out of their traditional homeland in and around Mosul.

But other news you may have missed this week includes the following:

Mother Angelica’s Eternal Word Television Network and Catholic News Agency announced that they are forming a new partnership. The parties will exchange no cash, and EWTN will assume responsibility for the activities of its new partners, said a statement on the CNA website.

CNA reported that a relic of newly canonized Pope John Paul II will be presented in several American cities, beginning today in Boston.

Cardinal Stanislaw Dziwisz of Krakow gave the relic, a vial of St. John Paul II’s blood, to the Knights of Columbus for the St. John Paul II National Shrine in Washington, which is co-sponsoring the tour. Other stops will include New York, Philadelphia and Baltimore.

Today also begins the third annual Fortnight for Freedom. The initiative started in the midst of ongoing controversy over the HHS Mandate. But the Supreme Court is due to issue its ruling in the Hobby Lobby case, which is central to the HHS Mandate controversy, any day now, and while we’re waiting, it’s worth reading this reflection from Michael Gordon at First Things.

While Christians and others were gathering in front of the United States Capitol Thursday to show their support for the traditional definition of marriage, the Obama Administration was cutting aid to Uganda for standing up for marriage. The East African country has a new law that “imposes harsh penalties on homosexuality,” Reuters reported. Seems the White House is so riled by this that it also canceled plans for a U.S.-sponsored military exercise meant to include other East African countries. The military exercise was to be held because “Uganda is a key Western ally in the fight against Islamic extremism in Somalia, where Ugandan troops form the backbone of the African Union force battling al Qaeda-aligned militants,” Reuters pointed out.

Obama, meanwhile, is planning to use his pen to advance causes dear to the gay lobby. The White House announced Monday that the president is planning to issue an executive order banning discrimination against LGBT persons by federal contractors. By the end of the week, the U.S. bishops conference expressed "great concern" over the news, as reported by the National Catholic Reporter. Key to their concerns, according to the article, is how the new order will define the terms "sexual orientation" and "gender identity" and whether it will provide any religious freedom protection.

Is it the air? The water? The agricultural lifestyle? How is it that two neighboring towns in Michigan–Fowler and Westphalia–can boast that a total of 44 of their native sons have become priests? Between them, the two towns have a total population of only 2200. Christina Capecchi, writing for The New York Times, describes some possible reasons: one of the local parishes holds a weekly prayer hour devoted to priestly vocations; it’s a solidly Catholic area where everyone attends Mass, and some families don’t even have a television.