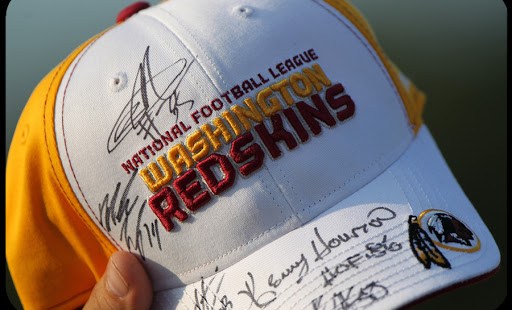 Behind the kerfuffle about the name of a football team.

We are told that “redskin” is a derogatory racial epithet, very much like the N-word. It carries a historical legacy of disdain and contempt. Whenever — 150 or 200 years ago — white persons used the term, they did so with the intention of implying that Indians are inferior human beings. The word was a word of degradation, just like the N-word.

Well, that may have been the case.  But isn’t that ancient history? Does anybody today use the word “redskin” (or should I call it the R-word?) as a term of contempt and degradation? Not that I’ve ever heard. This makes the R-word very different from the N-word, which has been used as a term of contempt within living memory, and is even today used that way by a few people.

There was a time (back in the days of “No Irish need apply”) when “Irish” or “Irish-Catholic” was routinely used with strong emotive connotations of contempt. But that too is ancient history. Irish Catholics don’t get offended by the expression, not even when Notre Dame teams call themselves “the fighting Irish” — even though that nickname alludes to an old anti-Irish stereotype according to which the Irish (that is, Irish Catholics) were especially prone to drinking and brawling.

If the word “redskin” is not truly racist, then, why do so many people, especially those on the political left (e.g., U.S. Senate Majority Leader Harry Reid), object to it? Let me offer two hypotheses to explain this often passionate liberal opposition.

First, think of a racial narrative that is very popular among white political liberals. According to this narrative virtually all white Americans (except of course white liberals themselves) are racist at heart. This white racism is primarily aimed at blacks, but secondarily it aims at all other non-white groups, including of course Indians, whether these come from the United States or Mexico or some other Latin American country. If you accept this narrative, you will quite naturally embrace the notion that “Redskins” is a racist name.

But why do white liberals like to believe, contrary to fact, that all non-liberal whites are racist? Partly from strategic political reasons: they hope to see the emergence of a majority political coalition of all “persons of color,” a coalition that will allow itself to be led toward a progressive utopia by white liberals. And partly it is because it gives white liberals a feeling of moral superiority; for if racism is a great sin (the great American sin), and if white liberals are free from this sin while all other whites are drenched in it, then white liberals are quite obviously morally superior people. Being righteous, they can feel good about themselves and about their many social and economic privileges.

Second, athletic teams are given Indian names because there has long existed a favorable stereotype according to which Indians are especially characterized by the virtue of courage. If you want to signify that the players on your team are full of bravery and “fight,” call them Braves or Indians or Seminoles or Redskins. So far from being a racial insult, it is a racial compliment — at least it is so for those who, like Homer and Aristotle and Thomas Aquinas and almost all ordinary people up until the present moment, consider courage to be a great virtue.

But courage is a distinctively “manly” virtue. Not that a woman cannot be courageous; but courage has traditionally been more demanded of men than of women, just as chastity has traditionally been more demanded of women than of men. Today, however, there is a certain kind of radical feminist who is suspicious of manliness; for men, according to this kind of feminist, are the collective enemy of women. The world would be better off if men were less manly and more feminized. If manliness is a suspect thing, then courage — the manly virtue par excellence — is a dubious virtue at best. And a name like “redskin” should be stricken from our American vocabulary, just as we try to strike the N-word from our vocabulary.

The liberal myth of white racism and the feminist myth of the badness of men — these, I suggest, explain the kerfuffle about the nickname of the Washington football team.

David Carlin, a former Democratic Majority Leader of the Rhode Island Senate, is the author of Can a Catholic Be a Democrat? How the Party I Loved Became the Enemy of My Religion.