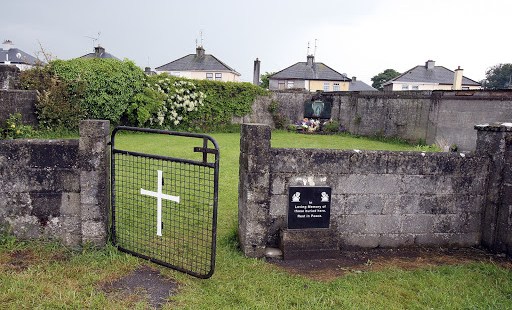 AFP PHOTO/PAUL FAITH
IRELAND, Tuam : This picture shows a shrine in Tuam, County Galway on June 9, 2014, erected in memory of up to 800 children who were allegedly buried at the site of the former home for unmarried mothers run by nuns. Up to 800 babies and children were buried in a mass grave in Ireland near a home for unmarried mothers run by nuns, new research showed, throwing more light on the Irish Catholic Church's troubled past. Death records suggest 796 children, from newborns to eight-year-olds, were deposited in a grave near a Catholic-run home for unmarried mothers during the 35 years it operated from 1925 to 1961. AFP PHOTO/PAUL FAITH
Share
Print
John Burger - published on 06/22/14

The story of the nearly 800 children who died at the home for unwed mothers and their children in Tuam, Ireland, sounded fishy when it first came to Aleteia’s attention, and we took a closer look at it. For one thing, the Associated Press’s original report said that children who died at the home, run by the Bon Secours Sisters were not baptized or given a Christian funeral, as it was Church teaching that children of unwed mothers were denied both.

“I never heard of such a doctrine,” said Church historian and Aleteia Board of Experts member James Hitchcock at the time. “My impression was that it was considered important to get a baby baptized as quickly as possible.”

But that aspect is only one thing that is now causing AP and other major media to issue corrections. Here is AP’s:

DUBLIN (AP) — In stories published June 3 and June 8 about young children buried in unmarked graves after dying at a former Irish orphanage for the children of unwed mothers, The Associated Press incorrectly reported that the children had not received Roman Catholic baptisms; documents show that many children at the orphanage were baptized.

The AP also incorrectly reported that Catholic teaching at the time was to deny baptism and Christian burial to the children of unwed mothers; although that may have occurred in practice at times it was not Church teaching.

In addition, in the June 3 story, the AP quoted a researcher who said she believed that most of the remains of children who died there were interred in a disused septic tank; the researcher has since clarified that without excavation and forensic analysis it is impossible to know how many sets of remains the tank contains, if any.

The June 3 story also contained an incorrect reference to the year that the orphanage opened; it was 1925, not 1926.