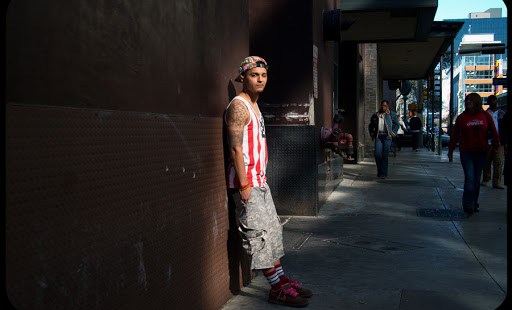 From the perspective of a homeless teen who’s just arrived at Covenant House, I might as well have come from another planet. My life has been so unlike their own. I was fortunate enough to grow up with a father and mother, in a home they owned, and I graduated from college.

The teens at Covenant House have endured a lifetime of deprivation, suffering and rejection that I can never fully understand. I’ve never lived on the street or known the feeling of being hungry, thirsty, or completely alone. Many of these kids have trouble trusting other people–and for good reason, considering the number of people who have abandoned them or used them, and the way many have been mistreated by staff members in other shelters and in foster homes.

They arrive here expecting more of the same. When they find out that I’m a full-time unpaid Jesuit volunteer, they’re shocked that anyone who could earn a good salary would “waste his time” volunteering to help them. I understand why. For them, money is the way to escape homelessness.

How can someone from a stable, comfortable background gain their trust and help them acquire the skills and habits they’ll need to survive, maybe even flourish, as adults?

The answer comes from the patron saint of “juvenile delinquents” (!), as well as editors, publishers, school children and magicians: St. John Bosco. The youngest of three boys, his father (a farm hand) died when John was only two. He left home at 12 to hire himself out as a farm servant. Eventually he was encouraged and helped by an elderly priest to go to school, and later, enter the seminary.

While working with homeless children in the streets of Turin, Italy, Don Bosco developed a methodology to rehabilitate them that embodies three principles: reason, religion, and kindness.

“Reason” acknowledges the child’s right to consent to instruction and guidance. It recognizes that before a child can be taught, he or she must be willing to learn–a transformation that often requires patience and perseverance when trying to help homeless youth.

“Religion” encourages the development of virtue and the direction of individual abilities toward the common good. Don Bosco’s approach was, of course, a thoroughly Catholic five-step program for personal holiness. It emphasized holiness in ordinary life–evolving into the joy and optimism that are fruits of holiness. The final three steps involve the centrality of Confession, the Holy Eucharist, and love of Mary.

Although most youths at Covenant House are not Catholic, in my everyday interactions with them and the advice I give them, I’m still able to convey the values inherent in the first two steps. I question them about the mistakes of their past and challenge them to become better people. And the Christian foundation of Covenant House also aids in their spiritual development, by promoting virtuous living and helping others for the good of the community.

Kindness is best summarized in one of Bosco’s aphorisms: "Let us make ourselves loved, and we shall possess their hearts." Bosco provided a warm, open environment, giving individual attention to each child and building rapport, respect, and attention. He fostered such an environment through magic tricks, games, and jokes.

Building rapport through magic tricks and jokes is not my forte. I don’t know any magic tricks and my jokes would seem pretty lame to them. But, fortunately, I was raised in Indiana where basketball is basically the official state sport.

There is a full court on the Covenant House campus and basketball is the favorite activity of the young adults here. At least once a week I play basketball with the boys. Playing basketball allows me to connect with them in ways that words alone cannot. In fact, on the court I’ve won the respect of a few boys who probably wouldn’t otherwise have acknowledged me. I’ve also learned a few card games, like spades and tonk, in my time here. These, too, have proven invaluable in forming and maintaining relationships with the residents.