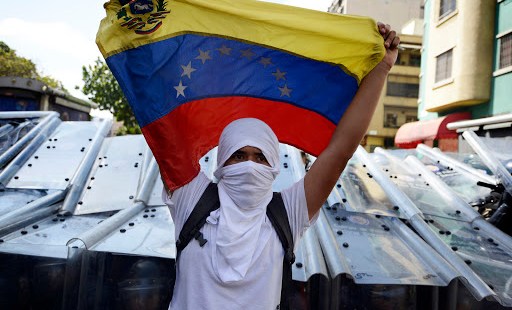 © JUAN BARRETO / AFP
VENEZUELA, Caracas : A demonstrator holds a Venezuelan flag in front of riot policemen during an opposition demo against the government of Venezuelan President Nicolas Maduro, in Caracas on February 12, 2014. Unidentified assailants on a motorcycle fired into a crowd of anti-government protesters, wounding at least two people.
Share
Print
Agenzia Fides - published on 06/23/14

Caracas (Agenzia Fides) – It has been three days since 15 students have begun a hunger strike in a church in Caracas, demanding the intervention of Catholic Church their fight against violations of freedom in Venezuela. The young people are calling the initiative "permanent fasting" and are calling for the release of students who were arrested in various events that took place against the government.

Some students contacted the press to report what has been happening since February, when the students gave way to a series of anti-government protests, which were later joined by other social groups, some of them very violent, that resulted in deaths, injuries and several arrests.

Insecurity, impunity, inflation and widespread violence are among the main problems to deal with in the country.

Dialogue between President Nicolas Maduro and representatives of the opposition, which was opened with the reading of a message from Pope Francis, seems to have stopped.