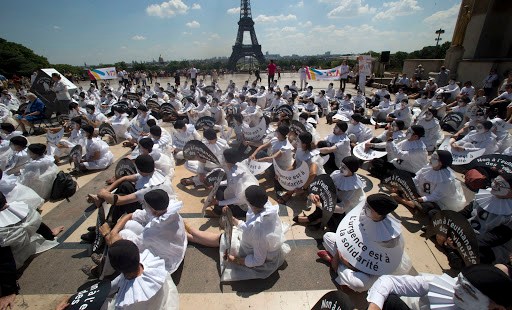 Demonstrators dressed as mime artists hold placards which read "no to the euthanasia of elderly people, solidarity is urgent", at Trocadero plaza in Paris, Tuesday June 24, 2014. One of France's top courts will rule Tuesday on whether to cut the life support of a 38-year-old in a vegetative state, in a case that has torn his family apart. The State Council is due to make the sensitive call on the case of Vincent Lambert, who has been a quadriplgic since a car crash in 2008. Eiffel Tower is in the background. (AP Photo/Michel Euler)

Five of nine British judges suggest amending law to be in line with European Convention.

PARIS (AP) — A French doctor was acquitted Wednesday of poisoning charges after giving lethal injections to seven terminally ill patients, and Britain’s Supreme Court said an assisted-suicide ban is incompatible with human rights, fueling the arguments of those who say the duty of doctors is to end the suffering of those beyond treatment.

Coming a day after France’s top administrative court ordered an end to the treatment of a comatose man — a decision later blocked by the European Court of Human Rights — the rulings cast new light on the legal struggle over medical treatments for the terminally ill or patients in vegetative states.

Euthanasia is currently legal in the Netherlands, Belgium and Luxembourg. France’s president has said he wants to make it easier for some terminally ill patients to request medical help to end their lives in the majority-Catholic country.

Relatives of Dr. Nicolas Bonnemaison’s patients had testified in his favor. The physician’s lawyer said he hoped the decision — and Tuesday’s separate rulings in the case of the comatose man — would force the government to act quickly.

"There are no heroes here, no martyrs," said the lawyer, Benoit Ducos-Ader. "This man acted as a doctor. He always acknowledged that, shouted that, despite the blows he received."

The British Supreme Court decision was unexpectedly far-reaching. Although it dismissed the appeal from two severely disabled men who argued the law should be changed to allow doctors to legally kill them, the ruling suggested that Parliament change the law to be in line with human rights guarantees.

"It’s the strongest thing they could do" short of overturning the law, said Penney Lewis, a law professor at King’s College in London.

Five of the nine British judges suggested British politicians should amend the law to be in line with the human rights guaranteed under the European Convention.

One of the men who brought the case, Paul Lamb, is paralyzed following a car accident. The other, Tony Nicklinson, died of pneumonia in 2012, but the case has been taken over by his widow.

Lewis said the British case and the acquittal of Bonnemaison followed a trend of broadening legal acceptance for euthanasia and assisted suicide.

"I think public opinion has been there a lot longer than the legal opinion," she said.

But the case of Vincent Lambert, the Frenchman now in a vegetative state, showed a continued ambivalence toward the issue. Lambert’s family is divided on whether to withhold food and hydration.

The French court on Tuesday said doctors could do so under French law, saying he had made his wishes clear before his car accident six years ago.

That decision was overruled hours later by the European court in a highly unusual late-night decision. It ordered France to continue treatment until it can examine the case. The court has jurisdiction across Europe and member countries are bound by its rulings.

"He is not sick, he is not at the end of his life, he is not suffering," Jean Paillot, a lawyer for Lambert’s parents, told BFM television on Wednesday. "From our perspective, there is no reason to stop feeding or hydrating him."

The Lambert case has echoes of the legal fight over Terri Schiavo, a Florida woman who suffered brain damage in 1990 when her heart stopped. She died in 2005 after her husband won a protracted court case with Schiavo’s parents to have her feeding tube removed.